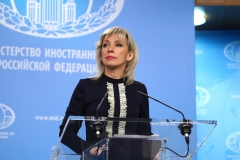 (CNSNews.com) – Russia’s foreign ministry on Wednesday threatened “serious consequences” after a news report in the Czech Republic alleged that a Russian agent had been dispatched to poison officials in Prague.

The report in the newspaper Respekt, citing unnamed Czech intelligence sources, alleged a Russian intelligence agency plot in apparent retaliation for Czech decisions to honor a slain Russian opposition leader and to remove a Soviet-era statue.

The report claimed that the Russian agent, picked up at the airport and taken to the Russian Embassy, had been carrying the poison ricin in his briefcase. (If inhaled or ingested through the skin ricin, an agent derived from castor oil beans, can cause multiple organ failure leading to death.)

The Russian Embassy called the allegations “absolutely baseless” and said they were designed to “discredit” Russia.

In Moscow, foreign ministry spokeswoman Maria Zakharova warned that “Prague should fully realize how serious the consequences of such methods and manipulations could be.”

“It’s not acceptable – if it’s true – for a foreign state to take action against our citizens here,” Prime Minister Andrej Babis said on Tuesday. “We are a sovereign state and we will certainly not allow any big world powers to influence our political affairs in any way.”

After the report was published the mayor of Prague, Zdenek Hrib, and two other city officials, Ondrej Kolar and Pavel Novotny, were placed under round-the-clock police protection.

Authorities refused to comment on whether the police protection was linked to the alleged poison plot, but Kolar told a local television network that the protection was provided to him “because there’s a Russian here who has been given the task of liquidating me. Not only me, but Mr. Hrib and Mr. Novotny.”

Kolar went on to criticize the national government for what he characterized as a weak stance toward Russia.

“I’m not afraid for my life. I’m afraid for this republic which, thanks to a completely incompetent government, is being dragged through the dust and is allowing a foreign state to do whatever it pleases,” Kolar told the Czech news service iDNES.

The news report prompted outrage in the Czech Senate, with the defense and security committee calling on the government Wednesday to take steps to reduce Russian interference in Czech affairs, such as by restricting Russian diplomatic staff.

In a controversial decision last February, Hrib renamed a Prague square in honor of Boris Nemtsov, a Russian opposition politician who was shot dead near the Kremlin in 2015, shortly before he was due to lead a public rally protesting President Vladimir Putin’s military intervention in Ukraine.

The square was deliberately chosen – it is the location of the Russian Embassy, and the name change effectively forces it to adopt an address bearing Nemtsov’s name.

Then in April, Kolar attracted similar criticism from the Kremlin for his decision to remove a statue of World War II Soviet Army marshal. Ivan Konev, who retook the Czech capital from the Nazis in 1945, is a Russian war hero but is seen by many Czechs as a relic of Soviet-era oppression.

Russian opposition leader Boris Nemtsov was murdered near the Kremlin in 2015. (Photo by Konstantin Zavrazhin/Getty Images)

In its Tuesday statement the Russian foreign ministry mentioned the sensitive issue of Nemtsov, signaling that it remains a sore spot for Moscow.

“Why support the opposition in another country by renaming the address of the embassy?” Zakharova asked. “That’s a very strange logic.”

In 2008, the District of Columbia council unanimously agreed to rename a portion of Wisconsin Avenue in front of the Russian Embassy in Washington the Boris Nemtsov Plaza.

In the 1980s, a section of the Washington street that was then home to the Soviet Embassy was renamed in honor of the dissident Andrei Sakharov.

In November 2006, Kremlin critic and former Russian intelligence officer Alexander Litvinenko died in London after being poisoned with radioactive polonium. A subsequent British inquiry concluded that the Russia’s Federal Security Service assassinated him, in a plot that it said was probably approved by Putin.

(Patrick Goodenough contributed to this report.)