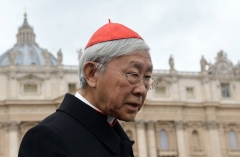 (CNSNews) -- In a series of tweets on May 13, Cardinal Joseph Zen, the bishop emeritus of Hong Kong, discussed the coronavirus and how globalization affected its worldwide spread and emphasized that the pandemic "started in China, a "totalitarian" regime where the "people are slaves under the Communist Party."

"The fact is: a pandemic started in China and it spread quickly over the whole world," said Cardinal Zen early in his remarks, entitled "Post Pandemic Globalization: the Role of China and the United States – Analysis and Action."

"The analysis: it must have something to do with globalization," said Zen.  "Globalization is a fact and the enormously increased mobility of the people explains, in part, the fast spreading of the pandemic."

"But the modern progress in communication could provide timely alarm and contain that spreading," he added.  "Obviously something went wrong."

He continued, "Let us remember that the globalization is an ambivalent phenomenon, it may be good, it may be bad, it depends on the way we manage it. Pope John Paul II used to distinguish a 'globalization of solidarity' from a 'globalization of marginalization.' one is operated by people who care for the real good of all human beings, the other is driven by selfish interest of individuals and groups."

"It is opportune also to remember what has been said by Pope Paul VI: The real progress is when everybody progress[es] and the whole human being progresses."

Cardinal Zen makes clear that he believes a globalization of marginalization has largely dominated over the last few decades. The global planners and people with political power have benefitted more often than the majority of people and workers.

"The actual outcome" has been "disappointing," says Zen. This is why you often see bloody "protests at the venues of meetings of world trade organization."

"[T]he poor of the poor countries did not feel they got any help from this globalized economy of the world," he said. "The managers of the globalization plan the world economy with scarce consideration of the real local situation and needs."

In Communist China this inconsideration is very apparent, he added.

"Has China become really rich and strong? he asked. "We have to distinguish between the people and the nation. China became rich and strong because its people are hard working and fast learning. China being the most populous community became a huge provider of labor in the world, capable of gigantic production and brings money to the nation’s coffers."

"But what about the people?" he said. "In a totalitarian regime the people contribute to the wealth of the nation, but they don’t get a fair share in its prosperity."

"In China the people are slaves under the Communist Party," said Zen.  "To slaves it is not allowed the luxury of dignity. Under the dominion and bad example of their masters, the Chinese people have lost their traditional virtues. In a world of 'struggle for survival' they make recourse to lies and violence, just like their masters."

On May 8, Cardinal Zen and other church leaders, bishops, priests, as well as doctors, scientists, journalists, theologians and tens of thousands of lay people signed the publicly released "Appeal to the Church and the World."

The Appeal warns of how certain governments are using the pandemic to restrict people and businesses, violating individual human rights and religious liberty.

"The facts have shown that, under the pretext of the Covid-19 epidemic, the inalienable rights of citizens have in many cases been violated and their fundamental freedoms, including the exercise of freedom of worship, expression and movement, have been disproportionately and unjustifiably restricted," reads the Appeal.

"We have reason to believe, on the basis of official data on the incidence of the epidemic as related to the number of deaths, that there are powers interested in creating panic among the world’s population with the sole aim of permanently imposing unacceptable forms of restriction on freedoms, of controlling people and of tracking their movements," according to the Appeal. "The imposition of these illiberal measures is a disturbing prelude to the realization of a world government beyond all control."

"We also believe that in some situations the containment measures that were adopted, including the closure of shops and businesses, have precipitated a crisis that has brought down entire sectors of the economy," reads the Appeal.  "This encourages interference by foreign powers and has serious social and political repercussions.

"Those with governmental responsibility must stop these forms of social engineering, by taking measures to protect their citizens whom they represent, and in whose interests they have a serious obligation to act."