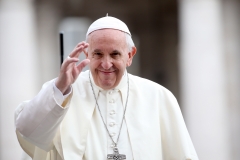 (CNS News) -- In a letter to the spring meeting of the World Bank and the International Monetary Fund, Pope Francis called for the creation of new institutions of "global governance" to help advance the "integral human development of all peoples." He also said the "financial industry" should calculate the "ecological debt" of countries "so that developed countries can pay it...."

We cannot "overlook another kind of debt: the 'ecological debt' that exists, especially between the global north and south," said the Pope in his April 8 letter. "We are, in fact, in debt to nature itself, as well as the people and countries affected by human-induced ecological degradation and biodiversity loss."

"In this regard, I believe that the financial industry, which is distinguished by its great creativity, will prove capable of developing agile mechanisms for calculating this ecological debt, so that developed countries can pay it, not only by significantly limiting their consumption of non-renewable energy or by assisting poorer countries to enact policies and programmes of sustainable development, but also by covering the costs of the innovation required for that purpose," he explained.

In reference to the COVID pandemic and how people and nations are recovering from its devastation, the Pope said the "notion of recovery cannot be content to a return to an unequal and unsustainable model of economic and social life, where a tiny minority of the world’s population owns half of its wealth."

There must be new ways to assist the poor -- "those at the margins of society" --  and include their needs in global financial decision-making," said Pope Francis. "The poor must not be excluded, he stressed.

"While many countries are now consolidating individual recovery plans, there remains an urgent need for a global plan that can create new or regenerate existing institutions, particularly those of global governance, and help to build a new network of international relations for advancing the integral human development of all peoples," wrote the Pope.

In the battle against COVID, the Pope concluded, "we especially need a justly financed vaccine solidarity, for we cannot allow the law of the marketplace to take precedence over the law of love and the health of all. Here, I reiterate my call to government leaders, businesses and international organizations to work together in providing vaccines for all, especially for the most vulnerable and needy."