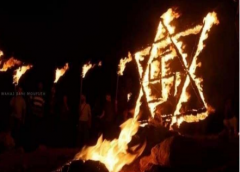 (CNS News) -- Some Palestinians are flying Nazi-like swastika flags, painting swastikas on walls, and even praising Adolf Hitler for his persecution of the Jews, according to a report by the Meir Amit Intelligence and Terrorism Information Center (ITIC) in Israel.

The report cites numerous examples of pro-Nazi activism that have occurred in the Gaza Strip and the West Bank during 2021 and earlier.

For instance, on Aug. 14, 2021, Palestinians held a demonstration on IDF-controlled land where they "ignited rags soaked in kerosene forming a swastika inside a Magen David [Star of David]."

"Videos of the display and the demonstrators, including children, holding torches, were uploaded to the social networks and broadcast by Hamas' al-Quds TV," reads the report.

On Sept. 25, 2021, Israeli soldiers uploaded a video to social media that showed a "Nazi flag hanging from the power lines on the outskirts of the Palestinian village of Bayt Umar, near Hebron." A similar flag was also flown (and photographed) in 2014 in the same village.

"On October 22, 2021, swastikas were painted on a roadblock on the Hawwara road, south of Nablus," according to the ITIC.

In the interview, posted and translated into English by MEMRI TV, the boy says, "We did not come here to enjoy ourselves, or to play, or anything like that. We came with our souls, our blood, our martyrs, and our wounded to sacrifice ourselves for Palestine and for our people."

"We asked Hitler why he left some of you alive," states the young man. "He did so in order to show us how wicked you are. We will come to you from under the ground and hammer fear into your hearts, and above the ground we will tear your bodies apart with our rockets. Scram into the shelters, you mice, you sons of Jewish women!"

A spokesman for the camp, Ahmad Al-Ra'i, says, "Regarding the military programs, as you can see behind me... The brothers who are responsible for these programs are the trainers and commanders of the Al-Quds Brigades, so they can instil military knowledge in these boys, teach them how to complete missions, as well as military skills like shooting positions, camouflage, shooting in motion, and urban warfare, so that in the next phase, Allah willing, these boys will be able to confront the plundering enemy and disfigure its face in the next war."

In its analysis of the anti-Jewish activism and displays, the ITIC said there are several aspects the radicals seek to promote.

1) "Defaming the Jews: It is possible to understand Hitler and the Nazis, because the [Ashkenazi] Jews [in Europe] were so detestable and loathsome the Europeans tried to get rid of them. Hitler did not kill all the Jews so that people who came after him, such as the Palestinians, could see for themselves that the Jews were inherently evil, understand and perhaps justify the Nazis' actions.

2) "The claim that Israel acts like Nazi Germany: Israel is accused of treating the Palestinians exactly or almost exactly as the Nazis treated the Jews. Zionism is the new Nazism (and the new apartheid), and the Palestinians are the new victims. The victims of Nazi racism have become Nazi racists themselves.

3) "The claim that the Zionists were Nazi collaborators: The Palestinians accuse the Zionists of collaborating with the Nazis, helping them establish their regime and even kill Jews, in the belief that it would cause the Jews of Europe to emigrate to Israel [sic] to escape the fate awaiting them.

4) "The adoption of Nazi symbols to show Palestinian hatred of the Jews: The Palestinians have adopted the swastika and the Nazi salute, and examples of such practices surface from time to time. Haj Amin al-Husseini, the Grand Mufti of Jerusalem at the time and an ardent opponent of Zionism, collaborated with the Nazis and met with Hitler, a fact rarely mentioned in the Palestinian narrative, but neither criticized nor expressed with remorse."

The ITIC is part of the "Israel Intelligence Heritage and Commemoration Center (IICC), a national site dedicated to the memory of fallen members of the Israeli intelligence community," according to its website.