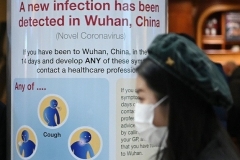 (CNSNews.com) – The United States has less than five percent of the world’s population but more than 20 percent of the total number of deaths attributed to COVID-19, CNN’s Jake Tapper declared on Sunday.

Abruptly ending a combative interview with White House trade advisor Peter Navarro, Tapper said, “I would just like to remind the American people watching that the United States has less than five percent of the world’s population, and the United States has more than 20 percent of the world’s coronavirus deaths. That is a fact. It does not matter how many times he insults CNN.”

Tapper is correct: At current estimates, the United States accounts for 4.26 percent of the world’s population of 7.8 billion. And as of early Monday, the U.S. accounts for 21.03 percent of the total number of deaths blamed on the coronavirus, which emerged in Wuhan, China late last year – 194,069 deaths out of a global total of 922,737.

That is a sobering reality, but it does not make the United States the worst-performing nation in the pandemic, as some critics have suggested.

Doing the same calculation for the 18 countries worldwide that are reporting the highest numbers of deaths blamed on COVID-19, finds that seven are doing worse than the United States, while ten are doing better:

Of that group of 18, the United States is doing better than Peru, Belgium, Ecuador, Chile, Brazil, Britain, and Spain.

The countries in that group of 18 that are doing better than the United States are Italy, Mexico, Colombia, France, Iran, South Africa, Argentina, Russia, Germany, and India.

(Experts have raised doubts about the accuracy of data provided by some countries, most notably in the cases of Russia, and Iran – where an exiled opposition group claimed at the weekend that more than 101,000 people have died, in contrast to the official figure of 23,157.)

Of the ten western democracies reporting the highest numbers of deaths attributed to COVID-19, the United States has the fourth-highest per capita death toll.

The percentages are calculated using figures from the real-time coronavirus database of the Center for Systems Science and Engineering at Johns Hopkins University, and national populations from the CIA World Fact Book.