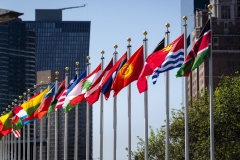 (CNSNews.com) – Dissidents from four countries with poor human rights records are appealing to U.N. member-states not to elect them onto the Human Rights Council this week.

As things stand, however, the U.N.’s top human rights body will have among its 47 members next year at least 13 of the world’s most repressive regimes.

With one-third (15) of the HRC seats due to be filled by the U.N. General Assembly in New York on Tuesday, four of the five regional groups have put forward one or more candidates whose records on political freedoms and civil liberties are so dismal they are graded “not free” by the Washington-based democracy watchdog, Freedom House. They are also all described as “authoritarian regimes” in the Economist Intelligence Unit’s Democracy Index for 2019:  China, Saudi Arabia, and Uzbekistan (Asia group); Gabon (Africa); Cuba (Latin America); and Russia (Eastern Europe).

Only the fifth group, Western Europe and Others, has put forward liberal democracies: Britain and France.

The 15 countries selected on Tuesday will join a council in January that will already have eight “not free” countries onboard. They are Bahrain, Cameroon, Eritrea, Libya, Mauritania, Somalia, Sudan, and the Maduro regime in Venezuela.

Because all but one of the regional groups have submitted closed slates – the same number of candidates as there are vacancies – the election outcome can largely be predicted ahead of time.

The only contest is in the Asia group, where five candidates are competing for four available seats. Pakistan and Nepal (both ranked “partly free”) are in the running with China, Saudi Arabia, and Uzbekistan.

At this late stage of the process, the only thing democracies can do to signal their opposition to countries like China or Saudi Arabia joining the Geneva-based HRC is withhold their votes. In theory, they can deprive a candidate deemed unsuitable of the simple majority required to win a seat – 97 votes in the 193-member General Assembly. In such a scenario, a more suitable country from the regional group in question could then step in and offer itself as a candidate for the vacant seat.

In past elections for the HRC, however, some of the most controversial candidates have won seats by large majorities.

Those vote counts show that, under the cover of a secret ballot, even some free democracies are evidently green-lighting candidates like China, Cuba and Pakistan.

Against that background, rights advocates are urging democracies not to vote for unsuitable candidates.

After assessing all of the candidates, U.N. Watch, a Geneva-based non-govermental organization that monitors the HRC, last week joined two others – Human Rights Foundation and the Raoul Wallenberg Center for Human Rights – in calling on U.N. member-states to reject six of them.

They argued that China, Cuba, Russia, Saudi Arabia, Pakistan, and Uzbekistan were “unqualified” due to their human rights records at home, as well as their voting records on U.N. resolutions dealing with human rights. (“Not free” Gabon, a last-minute candidacy for the Africa group, was not evaluated in the report.)

“It’s logically absurd and morally obscene that the U.N. is about to elect to its top human rights body a regime that herded one million Uighurs into camps, arrested, crushed and disappeared those who tried to sound the alarm about the coronavirus, and suffocated freedom in Hong Kong,” said U.N. Watch executive director Hillel Neuer.

“Saudi Arabia carried out a record 184 executions in 2019,” he said. “Russia assassinates journalists and poisons dissidents. Cuba is a police state.”

On Friday, U.N. Watch hosted a press conference in Geneva featuring dissidents from China, Cuba, Russia and Pakistan, all calling on U.N. member-states not to vote for their countries.

“By any standard, China has grossly violated the council’s founding principles and does not measure up to its membership criteria. Any statement suggesting otherwise is as cynical as ridiculous,” said Chinese dissident Yang Jianli, citing religious persecution of ethnic minorities, the crackdown in Hong Kong, and Beijing’s attempted cover-up of the coronavirus outbreak.

“Although the vote next week will be cast in a secret ballot, I urge the people of democracies to ask how your governments vote. You and we, the victims of the Chinese government abuses and China’s human rights defenders, deserve to know.”

Yang, an exiled veteran of the 1989 pro-democracy protests in Tiananmen Square a former political prisoner, is founder of the U.S.-based Citizen Power Initiatives for China, which advocates a peaceful transition to democracy in his homeland.

Rights-violating regimes frequently flaunt their election onto the HRC as evidence of global approval. When China four years ago won a seat with 180 votes, foreign ministry spokeswoman Hua Chunying said it “speaks volumes for credit given by the international community to China for its achievement in developing human rights and activeness in conducting international communication and cooperation on human rights.”

Neuer said if abusers continue to be elected onto the HRC, it would be better to scrap elections altogether and open membership to all 193 U.N. member-states. That would at least deprive abusing regimes of the ability to tout their elections as international endorsements of their human rights records, he argued.

The Trump administration in 2018 withdrew from the HRC; The Democrat Party pledges in its 2020 platform to rejoin.