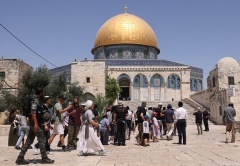 With the Dome in the Rock mosque in the background, Jewish visitors enter the Temple Mount compound in Jerusalem on Sunday, a fasting day marking the destruction of ancient Jewish temples. (Photo by Ahmad Gharabli/AFP via Getty Images)

(CNSNews.com) – Ahead of Monday’s first meeting between President Biden and Jordan’s King Abdullah, the kingdom on Sunday mischaracterized Israeli government-approved visits by Jews to Judaism’s holiest site on a Jewish holy day as the “storming of the holy compound by extremist settlers under Israeli police protection.”

Reiterating claims frequently made by Israel’s detractors, Jordan’s foreign ministry accused Israel of “violations” of the al-Aqsa mosque, the third-holiest site in Islam.

What Jews know as the Temple Mount – the most revered site in Judaism – and Muslims call Haram al-Sharif, is a 35-acre, open-air hilltop platform in Jerusalem’s Old City that was the location of the ancient biblical Temples, and is home to al-Aqsa and the adjacent, iconic Dome of the Rock mosque.

Despite Jordan’s claims, “extremist settlers” did not “storm” the compound.

Instead, Israeli Prime Minister Naftali Bennett approved visits to the site by Jews wanting to mark Tisha b’Av, a somber memorial of the destruction of the biblical temples in 586 BC and 70 AD, and other historical calamities.

“The prime minister instructed to allow organized and safe ascendance of Jews to the Mount, while keeping order at the site,” his office said in a statement.

Early on Sunday, Muslims in the al-Aqsa mosque threw stones in a bid to prevent Jews from visiting the compound, prompting police to disperse them without making arrests – and without entering the mosque itself.

Then during the course of the day, a reported 1,700 Jews visited, singly or in groups, under heavy police guard. No incidents were reported, and Bennett later thanked police for handling the day sensitively and protecting the right of Jews to visit.

Two Islamic holy days linked to the annual Hajj, the Day of Arafa followed by Eid al-Adha, are marked on Monday and Tuesday, and Bennett also assured Muslims that “full freedom of worship on the Temple Mount will be maintained for Muslims, as well.”

Despite the day passing mostly without incident, the Palestinian Authority’s Islamic Affairs division accused Israel of “violating the sanctity” of the compound, and of enabling “groups of Jewish extremists to storm into the compound, to make provocative tours and perform rituals, after emptying it of Palestinian who came to worship on this blessed day for Muslims.”

“The Israeli actions against the mosque are rejected and condemned, and represent a violation of the historical and legal status quo, international law, and Israel’s obligations as an occupying power in East Jerusalem,” said spokesman Daifallah al-Fayez.

He added that the entire Haram al-Sharif compound is a site of worship “purely for Muslims.”

‘So-called destruction of the alleged Temple’

Jordan’s Hashemite dynasty has enjoyed custodianship of the al-Aqsa mosque for the past century.

Located in territory occupied by Jordan from 1948-1967 – when Jews were not permitted to pray at any holy sites in Jerusalem’s Old City – the Temple Mount came under Israeli sovereignty during the 1967 Six Day War. But Israeli authorities chose to cede its administration to a Jordanian Islamic trust, and the 1994 Israel-Jordan peace treaty underscored Jordan’s “special role.”

The nearest point observant Jews are generally able to pray publicly is the Western Wall on its western flank.

Israel has for years faced allegations that it is threatening the Islamic sites, a flashpoint for numerous flareups sparked by claims that “al-Aqsa is in danger.”

Ahead of the latest accusations from Jordan, the White House said Biden’s meeting with Abdullah on Monday “will highlight the enduring and strategic partnership between the United States and Jordan, a key security partner and ally of the United States.”

The visit to the White House would also “showcase Jordan’s leadership role in promoting peace and stability in the region,” said press secretary Jen Psaki.

“President Biden looks forward to working with His Majesty to strengthen bilateral cooperation on multiple political, security, and economic issues, including the promotion of economic opportunities that will be vital for a bright future in Jordan.”

Palestinian officials and their supporters have long been pushing the argument, including at U.N. forums, that Israelis and Jews have no heritage on the Temple Mount, notwithstanding archeological evidence, historical documentation, and biblical accounts.

Mahmoud Habbash, the religious affairs advisor to P.A. chairman Mahmoud Abbas, did so again on Sunday, declaring that Israel has no religious, historical or legal right to an inch of Jerusalem and the al-Aqsa mosque.

Heated rhetoric also came from the governments of Turkey (condemning Israeli forces for “allowing racist Jewish groups to raid al-Aqsa mosque”) and Pakistan (condemning “violent attacks” against “worshippers and the sanctity of the Al-Aqsa mosque”).

And in the U.S., Rep. Rashida Tlaib (D-Mich.) weighed in on Twitter, “Why is Israel attacking Al Aqsa on Eid Al Adha (the holiest day for Muslims)? Why attack people who are literally kneeling down in prayer? Answer: To continue dehumanizing Palestinians even in prayer. It’s not enough to bomb them while they sleep or demolish their homes.”

(Eid al-Adha is fact starts on Monday evening at sunset.)

The Organization of Islamic Cooperation (OIC) news agency’s reporting on the day included the assertion that Israel had allowed Jewish “settlers” to “storm” the mosque compound “in memory of the so-called destruction of the alleged Temple.”

When the U.N. culture agency in a 2016 implicitly backed the Muslim position by referring to the Temple Mount only by its Islamic name, then-Republican presidential candidate Donald Trump said in a statement, “The United Nations’ attempt to disconnect the State of Israel from Jerusalem is a one-sided attempt to ignore Israel’s 3,000-year bond to its capital city, and is further evidence of the enormous anti-Israel bias of the U.N.”