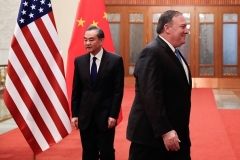 (CNSNews.com) – Nearly half a century after President Nixon’s historic visit to China paved the way for one of the world’s most significant bilateral relationships, Secretary of State Mike Pompeo on Thursday characterized engagement with Beijing as a failure, and urged free democracies to work together to “induce” the Chinese Communist Party to end its malign behavior.

“If the free world doesn’t change Communist China, [it] will surely change us,” Pompeo said in a speech at the Richard Nixon Presidential Library in Yorba Linda, California, a deliberately symbolic choice of venue.

“Securing our freedoms from the Chinese Communist Party is the mission of our time, and America is perfectly positioned to lead it because our founding principles give us that opportunity.”

Pompeo’s speech comes amid a campaign of pushing back against Beijing’s policies and actions, including its handling of the coronavirus outbreak, repression at home, and spying and intellectual property theft which prompted this week’s order for the Chinese consulate in Houston to close.

“If we want to have a free 21st century, and not the ‘Chinese Century’ of which Xi Jinping dreams, the old paradigm of blind engagement with China simply won’t get it done,” Pompeo said. “We must not continue it, and we must not return to it.”

Nixon’s 1972 trip to China, seven months after National Security Advisor Henry Kissinger paid a clandestine visit, led to the establishment of diplomatic relations between the U.S. and People’s Republic of China in 1979.

“The world was much different then,” Pompeo said of the time of Nixon’s visit. “We imagined engagement with China would produce a future with bright promise of comity and cooperation.”

“But today, we’re all still wearing masks, and watching the pandemic’s body count rise, because the CCP failed in its promises to the world.”

Citing repression in Hong Kong and Xinjiang province, trade abuses costing American jobs, and a Chinese military becoming both stronger and more menacing, Pompeo said this behavior leads many to ask, “What do the American people have to show, now, 50 years on, from engagement with China?”

Pompeo said Nixon had “nobly sought a freer and safer world” and hoped that the CCP would return that commitment. U.S. policymakers assumed that as China became more prosperous it would open up, become freer at home and present less of a threat abroad.

“It all seemed, I am sure, so inevitable. But that age of inevitability is over. The kind of engagement that we’ve been pursuing has not brought the kind of change inside of China that President Nixon had hoped to induce.”

“The truth is that our policies, and those of other free nations, resurrected China’s failing economy, only to see Beijing bite the international hands that were feeding it.”

Listing further examples of troubling behavior by Beijing, from its bullying behavior towards Western corporations to intellectual property theft, and from use of slave labor in supply chains to threats to international commerce in key waterways, Pompeo quoted Nixon as having said that “he feared he had created a Frankenstein by opening the world to the CCP.”

Pompeo said free nations may have allowed this behavior for so long because they were “naïve about China’s virulent strain of communism, or triumphalist in our victory in the Cold War, or cravenly capitalist, or hoodwinked by Beijing’s talk of a ‘peaceful rise.’”

“Whatever the reason, today China is increasingly authoritarian at home and more aggressive in its hostility to freedom everywhere else. President Trump has said, ‘Enough.’”

Pompeo said the U.S. will “keep talking” with Chinese officials, but added that “the conversations are different these days.”

Describing Xi as “a true believer in a bankrupt totalitarian ideology,” he said “America can no longer ignore the fundamental political and ideological differences between our countries, just as the CCP has never ignored them.”