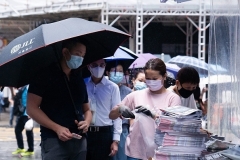 Hong Kong residents line up to buy copies of the final edition of the Apple Daily, which shut down Thursday under pressure from Beijing. (Photo by Bertha Wang/AFP via Getty Images)

(CNSNews.com) – After President Biden in a statement Thursday decried the closure of a Hong Kong newspaper targeted for its criticism of Beijing, the editor of a Chinese state media outlet posted jeering tweets referring to President Trump’s ejection from Twitter.

Global Times editor-in-chief Hu Xijian suggested that Twitter’s decision to permanently suspend Trump’s account following the January 6 breach of the U.S. Capitol was a case of official government censorship rather than the highly-contentious decision of a private company.

Responding to Biden’s criticism of China over the closure of Hong Kong’s Apple Daily tabloid, Hu tweeted, “What about Trump’s twitter account? What about Parler? Trump and his supporters have the right to freedom of expression. Instead, Washington is denying basic liberties and assaulting democratic institutions and processes, inconsistent with its international obligations.”

In an earlier tweet Thursday, Hu said, “Those who lament closure of Apple Daily today, please also call on Twitter to reinstate Trump’s account. Otherwise, what you show is not defense of press freedom, but inconsistent logic and insufficient wisdom.”

(The professed support for Trump’s “right to freedom of expression” comes from the editor of a Chinese Communist Party organ that has been a strident critic of the former president and his administration.)

The last sentence in Hu’s second tweet was lifted directly from Biden’s statement, which read, “Beijing is denying basic liberties and assaulting Hong Kong’s autonomy and democratic institutions and processes, inconsistent with its international obligations.”

But while “Washington” – the federal government – was not responsible for Twitter’s treatment of Trump, Apple Daily’s closure was the result of the CCP’s crackdown on democracy in Hong Kong. It came days after the independent paper’s publisher, editor-in-chief, and three other executives were arrested during a raid by hundreds of police officers and its assets were frozen.

Twenty-six years after the feisty tabloid first appeared in Hong Kong, it published its final edition on Thursday.

Authorities accused Apple Daily of advocating for foreign sanctions, an offense under the territory’s controversial national security law, which criminalizes actions viewed by the CCP as subversion, secession, and collusion with foreign forces.

The paper’s founder, 73-year-old pro-democracy campaigner Jimmy Lai, is serving a prison sentence over his role in an unauthorized protest in 2019. He also faces other charges under the national security law, including one of colluding with a foreign country. (Global Times periodically reminds readers that Lai met in 2019 with then-Secretary of State Mike Pompeo, a reviled figure in CCP circles.)

When China passed the national security law last year, the U.S. and others called the move a clear violation of the “one country, two systems” commitments made by the Chinese government in relation to the 1997 handover from British rule.

China pledged at the time to permit Hong Kong to continue to enjoy a “high degree of autonomy” under a capitalist system until at least 2047.

As critics had warned, the new law was quickly used to target pro-democracy activists, and Apple Daily is just the latest of many to fall foul of it.

“It is a sad day for media freedom in Hong Kong and around the world,” Biden said in response to news of the closure.

“Through arrests, threats, and forcing through a National Security Law that penalizes free speech, Beijing has insisted on wielding its power to suppress independent media and silence dissenting views.”

He called on China to release the detained journalists and media executives, and pledged that the U.S. would “not waver in our support of people in Hong Kong and all those who stand up for the basic freedoms all people deserve.”

Britain, the European Union and Japan also expressed grave concern about the development, attracting pushback from the Chinese foreign ministry.

“Freedom of the press does not entail impunity for crimes,” spokesman Zhao Lijian told a briefing. “Anti-China Hong Kong disruptors have no extrajudicial rights.”

“No foreign country has the right to point fingers at or make irresponsible remarks on Hong Kong affairs or China’s other internal affairs,” Zhao said.

In a swipe at Hong Kong’s former ruler, he advised Britain to “grasp the reality that it has been 24 years since Hong Kong returned to China, [and] get over its old colonial dream.”