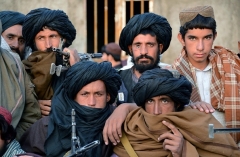 (CNSNews.com) – The U.S. intelligence community has not assessed that the Afghan government will collapse after the withdrawal of U.S. and coalition forces is complete, President Biden said on Thursday.

“There’s not a conclusion that, in fact, they cannot defeat the Taliban,” he told reporters in the East Room of the White House, in reference to the U.S.- and NATO-trained Afghan National Security Forces (ANSF).

He did not, however, discount the possibility of a civil war, drawing a distinction between that outcome and one in which the Taliban is victorious.

In response to a question about U.S. commander in Afghanistan Gen. Scott Miller’s stated concerns that a civil war could ensue, Biden said that the breaking out of a civil war is “different than the Taliban succeeding.”

The Wall Street Journal reported last month on a U.S. intelligence assessment that the government in Kabul could fall to the Taliban within six months of the U.S. departure. Senior Taliban commanders have scoffed at the idea that it would take even that long.

But asked about the intelligence community’s assessment “that the Afghan government will likely collapse,” Biden rejected the claim.

“That is not true,” he said. “They did not – they didn’t – did not reach that conclusion.”

Biden said the Afghan government and leadership “clearly have the capacity to sustain the government in place. The question is: Will they generate the kind of cohesion to do it?”

He recalled having told Afghan President Ashraf Ghani during a recent visit to Washington that the U.S. was not going to simply “walk away and not sustain their ability to maintain that force. We are.”

“But, there’s not a conclusion that, in fact, they cannot defeat the Taliban.”

Biden said that the 300,000-strong ANSF were “better trained, better equipped, and more – more competent in terms of conducting war” than the Taliban.

“Relative to the training and capacity of the ANSF and the training of the federal police, they [the Taliban] are not even close in terms of their capacity.”

When confronted with a Vietnam War exit analogy, Biden also rejected any comparison between the fundamentalist militia and the North Vietnamese Army.

“The Taliban is not the south – the North Vietnamese Army,” he said. “They’re not remotely comparable in terms of capability.”

Alluding to the evacuation of the U.S. Embassy in Saigon in 1975, he said, “There’s going to be no circumstance where you see people being lifted off the roof of a embassy in the – of the United States from Afghanistan. It is not at all comparable.”

Biden confirmed that the military mission, launched after the Taliban-allied al-Qaeda attacked America two decades ago, would conclude on August 31, and said the drawdown was “proceeding in a secure and orderly way, prioritizing the safety of our troops as they depart.”

The U.S. had gone into Afghanistan in 2001 for two reasons – “to bring Osama bin Laden to the gates of hell, as I said at the time,” and “to eliminate al-Qaeda’s capacity to deal with more attacks on the United States from that territory.”

“We accomplished both of those objectives – period.”

“That’s what I believed, from the beginning, why we should be and why we should have gone to Afghanistan,” he said. “That job had been over for some time. And that’s why I believe that this [troop withdrawal] is the right decision and, quite frankly, overdue.” 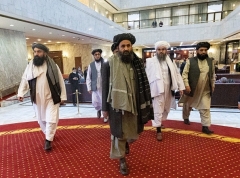 “The Taliban is gaining more ground by the day, and there are targets on the backs of our people and our partners,” House Foreign Affairs Committee ranking member Rep. Michael McCaul (R-Texas) said after Biden’s remarks.

“But rather than taking the opportunity to reassure the American people there are sufficient plans in place to keep American diplomats and our Afghan partners safe, President Biden only offered more empty promises and no detailed plan of action,” he said.

“Shockingly, he even rejected his own intelligence community’s assessments on the deteriorating security situation in the country. The time for platitudes and casting blame is over. The American people deserve answers and concrete solutions – not false hope.”

Biden told the press corps it was his view that “the only way there’s ultimately going to be peace and security in Afghanistan is that they work out a modus vivendi with the Taliban and they make a judgment as to how they can make peace.”

The history of Afghanistan since the mid-19th century alone has been one of civil strife, military coups, wars against the British empire, conflict between tribal warlords, mass atrocities against civilians, a 10-year Soviet occupation, from 1996 to 2001 a country divided between the Pakistan-backed Taliban regime in Kabul and the anti-Islamist Northern Alliance, with bin Laden’s al-Qaeda operating as a state within the Taliban-ruled state, followed by a two-decade long, inconclusive war.