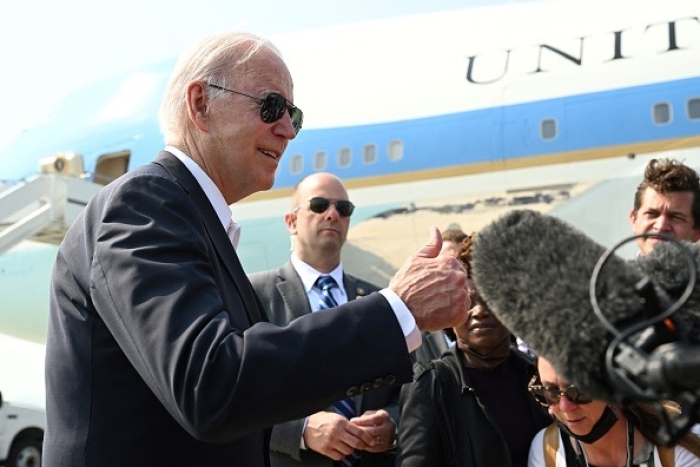 President Biden speaks to reporters before boarding Air Force One at Osan Air Base in Pyeongtaek, South Korea on Sunday. (Photo by Saul Loeb/AFP via Getty Images)

(CNSNews.com) – Amid continuing concerns that North Korea could conduct a nuclear or missile test while President Biden is in the region, the president was asked in Seoul on Sunday if he had a message for Kim Jong Un.

Biden sidestepped the invitation to reach out from Korean soil to the leader of the Stalinist state in the north, and said simply: “Hello.  Period.”

Sixteen months after taking office, the Biden administration has yet to report any progress in what it says have been persistent appeals to Pyongyang to engage.

Rather than respond, the regime has stepped up missile tests and belligerent rhetoric. As Biden headed to the Korean peninsula late last week, National Security Advisor Jake Sullivan warned of “a genuine possibility, real risk of some kind of provocation while we’re in the region.”

Just before he offered his brief “message” for Kim in response to a reporter’s question, Biden was asked if he was worried about a provocative action while he was in the region.

“We are prepared for anything North Korea does,” he replied. “We’ve thought through how we would respond to whatever they do.  And so, I am not concerned, if that’s what you’re suggesting.”

A day earlier, Biden was asked during a joint press appearance with South Korean President Yoon Suk-yeol whether he would be prepared to meet with Kim, and if he would have any preconditions for doing so.

“That would be dependent on whether he was sincere and whether it was serious,” he replied, without elaborating.

As Air Force One flew to Japan later on Sunday for the second leg of Biden’s tour, Sullivan took a question on how the administration would measure the seriousness and sincerity which Biden had referred to.

“The first step would be for North Korea to come forward and be prepared to actually engage in a dialogue,” he told reporters. “And thus far, they’ve not shown that they’re willing to do so.”

The administration would then be able to determine from the initial conversations whether or not the pathway for negotiations was a serious one, he said, adding, “But we’re not even at step one yet.”

Sullivan disagreed with a suggestion that Pyongyang’s willingness or otherwise to engage had to do with which president was in the White House.

North Korea had carried out nuclear and missile tests during the George W. Bush, Obama, and Trump presidencies, he recalled, and each of them had pursued diplomacy with the regime

Sullivan confirmed that the intelligence assessment remained that Pyongyang could carry out a nuclear or ballistic missile test during the trip.

A senior administration official briefing reporters on background said North Korea’s attempts to deal with the COVID-19 pandemic “may be a factor in their lack of response to our very, very repeated” offers to engage. (The reclusive regime only recently admitted a severe outbreak, but experts are skeptical that the country escaped the impact of the pandemic earlier.)

Asked if Biden was considering “making any kind of outreach, something a little more dramatic, something to break this sort of stalemate,” the official said the president has been clear that “we’re not looking for gestures, we’re looking for very serious engagement.”

“And this is a decision that only the DPRK can make,” the official said, using the acronym for the Democratic People’s Republic of Korea. 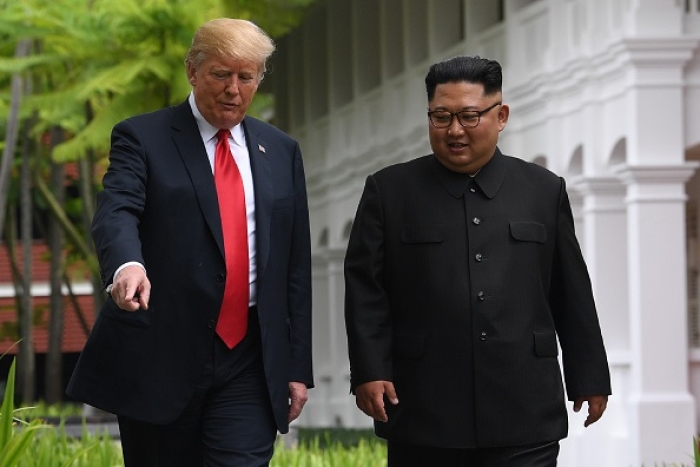 President Trump and Kim Jong Un at their June 2018 Singapore summit, the first ever between sitting U.S. and North Korean leaders. (Photo by Saul Loeb/AFP via Getty Images)

As alluded to by Sullivan, Pyongyang struck “six party” agreements in 2005 and 2007 during the Bush administration, and reached a “Leap Day Deal” with the Obama administration in 2012, all involving concessions in return for a suspension of the regime’s nuclear activity, and all failing to resolve the standoff.

President Trump tried a more direct approach, holding summits with Kim in Singapore in 2018 and in Hanoi the following year, the latter ending abruptly amid disagreement over a lifting of U.S. sanctions.

A third meeting, in the DMZ in June 2019, failed to break the deadlock, and there has been little visible movement since.

The Trump initiative did see Kim agree in 2018 to a moratorium on long-range and intercontinental ballistic missile tests, which held until earlier this year. He also refrained from testing a nuclear weapon after the regime’s sixth such test, in September 2017.

Apart from a significant cooling of tensions and suspension of threatening actions by the regime, the Trump diplomacy bore some fruit in other areas.

Then-Secretary of State Mike Pompeo traveled on Pyongyang to bring home three imprisoned Americans, and North Korea in the summer of 2018 released 55 boxes of remains of U.S. service personnel missing in action from the Korean War – the first such release by the regime since 2007.