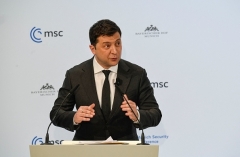 (CNSNews.com) – As soon as sanctions against Russia are triggered, their deterrent effect will be lost, Secretary of State Antony Blinken argued again on Sunday, after Ukrainian President Volodymyr Zelensky asked pointedly of the West, “What are you waiting for?”

Zelensky said Ukraine won’t need the West to impose sanctions against Moscow after Ukraine is attacked, after its borders fall, and after its economy tanks, and more of its territory is under foreign occupation.

The U.S. and allies have been saying for weeks that sanctions unprecedented in severity and scope will be directed at Russia should its amassing of military might near Ukraine’s border lead to an invasion – a stance reiterated by G7 foreign ministers on Saturday.

President Biden said a day earlier that he was “convinced” President Vladimir Putin has decided to attack.

Zelensky’s palpable frustration, aired at the Munich Security Conference, came amid a serious escalation in fighting between government forces and pro-Russian separatists in eastern Ukraine, and as Russia and Belarus said their joint wargames would not end, as initially scheduled, on Sunday.

“We are being told that have you several days and then the war will start,” said Zelensky, speaking through an interpreter. “And I said, okay, then apply the sanctions today.”

“Yet they say, we’ll apply sanctions when the war will happen. I’m saying, ‘Fine, but you are telling me that it’s 100 percent [certain] that the war will start in a couple of days. Well then, what are you waiting for?’”

‘All of this is very well thought through’

The Ukrainian president went on to question the reluctance of Western government at even lay out publicly the specific sanctions they intend to impose, should Russia invade.

Failing to disclose now what action will be taken, and against whom, in the event of an attack, made him doubt that sanctions would be triggered at all after the fact, he said.

The Biden administration has hinted at what type of sanctions are on the table, but without detailing them.

Forewarning Russia about the measures being prepared, Blinken said on CBS’ “Face the Nation” on Sunday, would enable it “to prepare more effectively to try to mitigate the sanctions.”

“All of this is very well thought through,” he added.

What is known is that banks and industries and senior figures would be in the firing line.

“We will target Russia’s financial institutions and key industries,” Vice President Kamala Harris said in Munich at the weekend. “And we will target those who are complicit and those who aid and abet this unprovoked invasion.”

The administration has also indicated that in the event of a Russian invasion, the Russia-to-Germany Nord Stream 2 gas pipeline will not go ahead – although German Chancellor Olaf Scholz has been much less explicit about the matter.

Harris told reporters early Sunday before returning from Munich to Washington that the U.S. and its allies continue to believe that “the deterrence effect of these sanctions is still a meaningful one.”

Blinken on the Sunday talk show circuit also doubled down on the “deterrent” argument.

“The purpose of the sanctions, in the first instance, is to try to deter Russia from going to war.  As soon as you trigger them, that deterrent is gone,” he told CNN’s “State of the Union.” “And until the last minute, as long as we can try to bring a deterrent effect to this, we’re going to try to do that.”

“We’re trying to prevent a war,” Blinken told NBC’s “Meet the Press.” “As soon as you trigger the sanctions, of course, any deterrent effect they may have is gone. They get absorbed by President Putin, and he moves on.”

Critics’ skepticism about the credibility of the Western sanctions threat was fueled when Biden acknowledged last month that there were differences among NATO allies over what actions should be taken in the event of Russian aggression short of an outright invasion.

Over the following days, Blinken began promoting what would effectively be a two-track response to Russian action: The U.S. and allies would respond in a “swift” and “united” way to any aggression, but if the aggression took the form of an invasion, the response would be “severe,” while if it took the form of action short of an invasion, such as a cyber attack, the response would be “calibrated.”

On Friday, the U.S. and Britain blamed Russia for cyber attacks that targeted the Ukrainian government and banks earlier in the week.

CBS News’ Margaret Brennan asked Blinken on Sunday about the promised response, now that the White House has blamed Russia for the hybrid attack.

“We’ve now made an attribution to Russia for those cyber attacks,” Blinken agreed. “We’re looking closely at the response that that may call for. And we’re doing all of this in coordination with allies and partners.  If Russia commits the aggression that may be in train, all of that has been part of our plan, and we’re carrying it forward.”

Joint Russian-Belarusian wargames in Belarus, Ukraine’s northern neighbor, were meant to end on Sunday but have now been extended. (Photo by Maxim Gucheck / Belta /AFP via Getty Images)

In the meantime, he defended the push for a diplomatic resolution, as he plans to meet with Russian Foreign Minister Sergei Lavrov in Europe this week.

“My job as a diplomat is to leave absolutely no stone unturned and see if we can prevent a war. And if there’s anything that I can do to do that, I’m going to do it,” he said.

The lead Republicans on the House Foreign Affairs, Armed Services, and Intelligence committees slammed the administration for not unleashing sanctions now.

“It is therefore ridiculous that the Biden administration has yet to impose a single meaningful sanction in response to this blatant and ongoing aggression,” they said. “It’s far past time to demonstrate to Putin, through actions, that there is a serious price to be paid for his destabilizing aggression.”