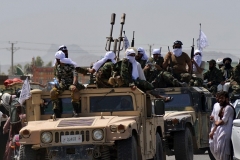 (CNSNews.com) – The nature of the relationship between the U.S. and a Taliban-led government in Afghanistan “will depend entirely on its actions in the weeks and months in time ahead,” Secretary of State Antony Blinken said on Wednesday, in yet another sign the administration has not unequivocally ruled out the possibility of recognizing as legitimate a regime led by a terrorist group that seized power by force.

Speaking on a visit to Germany, Blinken said the U.S. will find ways to engage with the Taliban for the purposes of advancing the national interest of the U.S. and its partners, and will “do it in ways that are fully consistent with our laws.”

The Taliban says it wants “international legitimacy and support,” he said, and it “can earn that legitimacy gradually, over time,” by meeting certain expectations of the international community.

Those expectation, enshrined in an August 30 U.N. Security Council resolution, “include freedom of travel, not allowing Afghanistan to harbor terrorists, humanitarian access, respecting the basic rights of the Afghan people – particularly women and minorities – not carrying out reprisals, and forming an inclusive government that can meet the needs and reflect the aspirations of the Afghan people.”

Blinken conceded that Taliban cabinet unveiled on Tuesday did “not inspire confidence in that last regard,” but he noted that the Taliban has termed it a “caretaker government” and added, “we’ll have to see what emerges in a more permanent government.”

Repeating the same phrase as a State Department spokesperson used in a Tuesday night statement responding to the cabinet announcement, Blinken said the U.S. was “concerned by the affiliations and track records” of some of those named. He did not elaborate.

Blinken’s comments came in opening remarks at a virtual meeting of 21 foreign ministers focused on the Afghanistan crisis, and during a later press briefing, both at the Ramstein Airbase in western Germany.

Asked specifically about the inclusion in the Taliban cabinet of wanted terrorist Haqqani Network leader Sirajuddin Haqqani – the most notorious of a deeply controversial group including sanctioned terrorists and suspected mass killers – Blinken did not address directly the question of whether the U.S. government would “continue to pursue him.”

Remarking again about the inclusion of “people who have very challenging track records,” Blinken said U.S. engagement with the Taliban would have the goal of advancing U.S. and partners’ interests.

“We have, and we will find ways to engage the Taliban, to engage an interim government, a future government, to do just that and to do it in ways that are fully consistent with our laws.”

The U.S. government designated the Haqqani Network as a foreign terrorist organization (FTO) in 2012.

Representatives and members of FTOs are inadmissible to the U.S., and any U.S. financial institution that holds FTO funds must block them and report them to the Treasury Department’s Office of Foreign Assets Control (OFAC).

Under applicable law, “U.S. persons are prohibited from conducting unauthorized transactions or having other dealings with or providing services to the designated individuals or entities.”

“Foreign persons may be held liable for effecting such transactions from or through the United States. Any property or interest in property of a designated person that is or comes within the possession or control of the United States or a U.S. person is blocked and must be reported to OFAC.”

‘The Taliban will be isolated’

For months, Blinken and other State Department officials have stated that any party that seizes power in Afghanistan by force will not receive international recognition.

On April 15, Blinken said it was “very important that the Taliban recognize that it will never be legitimate and it will never be durable if it rejects a political process and tries to take the country by force.”

On July 6, Price said, “the world will not accept an imposition by force of a government in Afghanistan,” repeating the words on July 12.

On August 4, Price said, “the international community won’t recognize a group, a future Afghan government, that seizes power through violence.”

On August 6, U.S. Ambassador Jeffrey DeLaurentis told the Security Council, “The Taliban must hear from the international community that we will not accept a military takeover of Afghanistan or a return of the Taliban’s Islamic Emirate. The Taliban will be isolated and an international pariah if they choose that path.”

On August 11, Price said that in talks then underway in Qatar led by special envoy Zalmay Khalilzad, “a major item on the agenda is making very clear to the Afghan parties and to the rest of the world that the international community will not accept any government that seeks to take control of Afghanistan by force.”

Price read out a list of countries – including Russia, China, and Pakistan – which he said “in one form or fashion have made the point that any government that seeks to take Afghanistan by force will lack international legitimacy.”