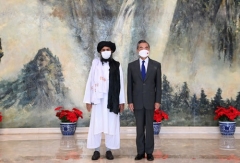 (CNSNews.com) – China used a G20 virtual summit on Afghanistan on Tuesday to argue that the countries which “caused the current predicament” should learn lessons from their policies and take responsibility to help prevent a humanitarian and refugee crisis.

Countries still imposing sanctions on Afghanistan should lift them, Foreign Minister Wang Yi told the meeting, organized by the Italian government, which holds the G20 presidency.

“Experience and lessons from Afghanistan over the past two decades have demonstrated that the right way to get along between countries is the respect for independent choices of development paths, and mutual inclusiveness and mutual learning among different civilizations,” the Xinhua state news agency cited Wang as saying.

“Imposing one’s own ideology on others, arbitrarily interfering in the internal affairs of other countries, or even resorting to military intervention will only bring about continuous turmoil and poverty, and cause serious humanitarian disasters.”

Asked whether Biden was disappointed about the absence of Xi and Putin, White House press secretary Jen Psaki did not comment directly.

“It was a call or was a meeting organized by the Italians. They can confirm the list of attendees,” she said. “But the president did see it as an opportunity and a constructive opportunity to discuss counterterrorism efforts and efforts to provide international humanitarian assistance.”

Italian Prime Minister Mario Draghi, who hosted the meeting, said afterwards that to his knowledge Xi and Putin had not stayed away “due to particular foreign policy reasons.” He said their absence had been “communicated in advance.”

China and Russia both abstained when the U.N. Security Council at the end of August passed a resolution calling for “an inclusive, negotiated political settlement, with the full, equal and meaningful participation of women,” and saying the council “expects that the Taliban will adhere to” its commitments to allow foreigners and Afghans who want to leave to do so safely.

China has long vocally opposed what it calls outside interference in countries’ internal affairs – not least its own – but its stance on Afghanistan has undergone a shift since 2001, when U.S.-led forces toppled the Taliban regime after the 9/11 terrorist attacks.

Almost 3,000 people were killed when planes hijacked by al-Qaeda terrorists flew into the World Trade Center in New York and the Pentagon, and crashed in a field in rural Pennsylvania. The U.S. invaded after the Islamist militia, which at the time controlled most of Afghanistan and was sheltering its al-Qaeda allies, refused to hand over Osama bin Laden.

A 20-year military engagement ended with the departure of the last U.S. and coalition forces, amid a chaotic mass evacuation mission, in August.

Beijing in 2001 voted in favor of several U.N. Security Council resolutions which, while not explicitly endorsing the invasion, provided the basis for it.

Declaring the 9/11 attacks “a threat to international peace and security” Resolution 1368 expressed the council’s “readiness to take all necessary steps to respond to the terrorist attacks of 11 September 2001, and to combat all forms of terrorism, in accordance with its responsibilities under the Charter of the United Nations.”

Resolution 1373 later that September reaffirmed “the inherent right of individual or collective self-defense as recognized by the Charter,” and “the need to combat by all means, in accordance with the Charter of the United Nations, threats to international peace and security caused by terrorist acts.”

In both cases China, a veto-wielding permanent member of the council, neither voted against the resolution nor abstained.

Both resolutions unanimously, as did three further Afghanistan-related measures over the following four months, including one that authorized the establishment of the International Security Assistance Force, and another that imposed further sanctions on the Taliban and al-Qaeda.

China recognized the interim post-Taliban administration established in Kabul in December 2001, and hosted its chairman, Hamid Karzai, in Beijing the following month.

China also sent representatives to international conferences on humanitarian aid and post-war reconstruction, and in early 2002 reopened its embassy in Kabul, which had been shuttered since the civil war upheavals in 1993.