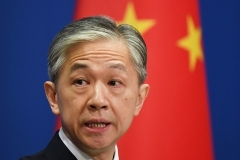 (CNSNews.com) – White House Press Secretary Jen Psaki says the United States will not “give up that easily” over China’s refusal to allow further study into the origins of the coronavirus outbreak but will continue to “press” Beijing to provide access and data.

China continues to disparage calls for further investigation into the possibility that the outbreak was linked to an accidental leak from a Wuhan lab, comparing it mockingly to claims before the Iraq war that Saddam Hussein was developing weapons of mass destruction.

“The U.S. moves to shift the blame of COVID-19 is no different from its lies on Iraq,” Chinese foreign ministry spokesman Wang Wenbin told a briefing. “The international community should be vigilant about this. I’m sure such moves will be rejected by people with insight.”

Asked about Secretary of State Antony Blinken’s recent call – in an “Axios on HBO” interview – for China to provide the international community with information and full access to the Wuhan labs, Wang once again pointed to a WHO-convened expert team’s conclusion, after visiting Wuhan early this year, that the lab-leak theory was “extremely unlikely.”

That assessment, accompanied by a recommendation that the hypothesis not be studied further, drew immediate and ongoing criticism from some scientists and Western governments.

Beijing, however, argues that it has cooperated fully with the WHO and has essentially been “cleared” of culpability, and that it’s now the turn of the U.S. to provide access to its bio-labs – which CCP officials have insinuated without evidence could be linked to the outbreak.

“We urge the U.S. to stop politicizing the study of origins, stop smearing China, adopt an open and transparent attitude on this issue, shoulder its due responsibilities, and invite WHO experts for origin study in the U.S.,” Wang said. 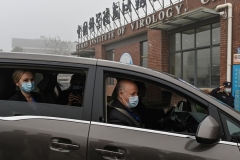 Members of the joint international-Chinese team investigating the origins of the COVID-19 coronavirus arrive at the Wuhan Institute of Virology in February 2021. (Photo by Hector Retamal/AFP via Getty Images)

Chinese state media reports on the issue distort the facts as they promote the government’s narrative.

A recent Xinhua report for instance stated, “The World Health Organization (WHO) said in March that COVID-19 introduction through a laboratory incident was considered to be an ‘extremely unlikely’ pathway, refuting lab-leak theories.”

It wasn’t “the WHO” that gave that assessment but a joint team of international and Chinese experts, mandated by the WHO to study the outbreak origin. And WHO director-general Tedros Adhanom Ghebreyesus in fact disagreed, saying that all hypotheses, including the lab-leak theory, “remain on the table” and need further investigation.

The other main hypothesis (“natural origins” theory) is that the outbreak began with the virus jumping from a bat or other animal, via an intermediate animal host, to humans.

President Biden said late last month he has instructed the intelligence community to investigate the origins of the outbrea, focusing on both the animal-to-human transmission and laboratory accident theories, and report back to him in 90 days.

During the WHO’s recent annual World Health Assembly, U.S. Health Secretary Xavier Becerra – without mentioning China – called on the WHO to ensure that a second phase of the investigation into COVID-19’s origins has “terms of reference that are transparent, science-based, and give international experts the independence to fully assess the source of the virus and the early days of the outbreak.”

Stronger words came from the U.S. Mission in Geneva, which said in a statement, “Phase 1 of the WHO-convened COVID-19 origins study was insufficient and inconclusive. We call for a timely, transparent, evidence-based, and expert-led Phase 2 study, including in the People’s Republic of China.”

“It is critical that China provides independent experts full access to complete, original data and samples relevant to understanding the source of the virus and the early stages of the pandemic,” it added.

Despite China’s stance, the Biden administration says it will press on.

National Security Advisor Jake Sullivan told reporters at the White House on Monday that the U.S. has been “quite vocal about our view that there needs to be a second round to this investigation that truly gets to the heart of the matter, which is the original data and original information that is still being withheld by China.”

“And our hope is that in the coming months we will see a credible international investigation progress, including in respect to those items.”

Asked afterwards about Sullivan’s remarks in the light of China’s resistance, Psaki replied, “I don’t think we just give up that easily.  We are going to continue to press – in coordination with the international community – China to be transparent, to be forthcoming with data and information.  We're not going to just stand by and accept that they’ve said they're not going to participate.”

Asked what mechanisms it would use to apply pressure on China, Psaki cited “diplomatic conversations.”

“And we will continue to work through the WHO and also with our international partners to exert that pressure,” she added, without elaborating.

The CCP’s People’s Daily attributed the focus on a lab accident theory to anti-China sentiment, saying in an editorial that “The U.S. politicians and media organizations are working hand in glove with each other to spread rumors and stigmatize China because they can’t accept a growing China.”