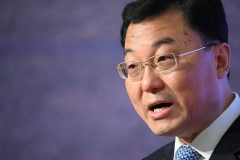 (CNSNews.com) – Deputy Secretary of State Wendy Sherman has begun a two-day visit to China in an atmosphere soured by sanctions and Chinese scoffing at the notion that the U.S. official was approaching the engagement “from a position of strength.”

Opening the talks in the port city of Tianjin near Beijing early on Monday, Chinese vice foreign minister Xie Feng said the main reason why bilateral relations were so bad was because some Americans view China as the “imagined enemy.”

He said some Americans use terms like “Sputnik moment” or “Pearl Harbor moment” when referring to the challenges facing the U.S. in its relationship with China. Xie said this amounted in the view of some international scholars to comparing China today to the Soviet Union during the Cold War or Japan during World War II.

“The hope may be that by demonizing China, the U.S. could somehow shift domestic public discontent over political, economic and social issues and blame China for its own structural problems,” China’s foreign ministry quoted him as saying.

“It seems that a whole-of-government and whole-of-society campaign is being waged to bring China down” – as though when China is contained, the domestic and external challenges facing the U.S. would disappear and “America would become great again.”

Ahead of Sherman’s visit, China slapped sanctions on six Americans and a U.S.-based advocacy group in retaliation for an administration business advisory issued a week earlier, cautioning U.S. businesses about risks arising from Beijing’s national security legislation implemented in Hong Kong. The law criminalizes actions viewed by the Chinese Communist Party as subversion, secession, or collusion with foreign forces. 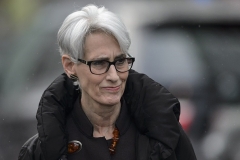 At a foreign ministry briefing on Friday, spokesman Zhao Lijian rejected a State Department assertion that Sherman would be visiting China “from a position of strength” because she had consulted en route with key regional allies including South Korea and Japan.

State Department spokesman Ned Price likened that process to a meeting between Secretary of State Antony Blinken and National Security Advisor Jake Sullivan and two top Chinese officials in Anchorage, Alaska last March, which also came after high-level contacts with U.S. allies in Asia and Europe, in keeping with the administration’s strong focus on working with “allies and partners” as it faces major global challenges.

The Alaska meeting, the first face-to-face U.S.-China interaction of the Biden administration, was marked by on-camera heated rhetoric and posturing.

At Friday’s briefing, Zhao ridiculed Price’s comment about Sherman visiting “from a position of strength.”

“As China has pointed out many times, the U.S. is in no position to lecture or point fingers at China, or to deal with China from ‘a position of strength,’” he said. “We didn’t buy that in Anchorage, and we certainly won’t buy that in Tianjin.”

While arranging the visit, the two sides even wrangled over the level of engagement Sherman would have. The State Department stressed its number two leader should meet with Chinese foreign minister Wang Yi – who despite his title is essentially Sherman’s counterpart, protocol-wise. (China’s top-ranking foreign affairs official is Yang Jiechi, director of the CCP’s central foreign affairs commission.)

But Beijing wanted Sherman to interact with Xie Feng. It subsequently agreed that Sherman would “meet with” Wang, but “hold talks with” Xie. For its part, the State Department said she would hold separate “discussions” with both Chinese officials.

On Saturday, Wang also responded to Price’s “from a position of strength” remark, warning the U.S. not to approach the talks in a condescending manner.

“I want to tell the U.S. side that there is never a country that is superior to others, and there shouldn’t be one,” the CCP organ Global Times quoted him as saying.

In addition to tensions over Hong Kong, China-U.S. relations are mired in contention over human rights abuses in Xinjiang, U.S. accusations of Chinese cyberattacks worldwide, and the politically-charged issue of investigations into the origins of the coronavirus outbreak.

China has rejected a World Health Organization proposal to examine laboratories in Wuhan as the investigation proceeds; the White House called its refusal “dangerous” and “irresponsible.”

Wang doubled down on Sunday, accusing the U.S. of trying to politicize the pandemic, in a bid to blame others for its inability to curb the virus at home.

Two U.S. officials briefing on background ahead of the visit said Sherman would make clear during the talks that the U.S. welcomes “stiff and sustained competition” with China but that there needs to be a “level playing field.”

She would also “underscore that we do not want that stiff and sustained competition to veer into conflict.”

On the question of Beijing’s reciprocal sanctions, one of the briefing officials dismissed them as “just another instance of China targeting private citizens and others for actions that the U.S. government is taking to uphold our interests and values.”

Those targeted include former Commerce Secretary Wilbur Ross, Carolyn Bartholomew, chair of the U.S.-China Economic and Security Review Commission – a statutory body that reviews the national security implications of trade and economic ties with China – and the Hong Kong Democracy Council, a Washington-based NGO.