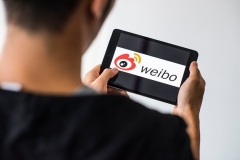 A Chinese man loads the Weibo app on a smart device. (Photo by studioEAST/Getty Images)

(CNSNews.com) – Relations between the Chinese and United States governments may have deteriorated significantly during the Trump administration, but many users of one of China’s biggest social media platforms want the former president to join the network, state media reported.

Reacting to President Trump’s announcement that he was suing Twitter, Facebook and Google for allegedly censoring conservative views, the microblogging platform Weibo launched a survey on Thursday in which a reported 78 percent of participants expressed the hope Trump would join.

“Please come! We will have so much fun!” Global Times quoted one of those commenting under the survey as saying.

“Seriously, he should definitely consider joining Weibo in light of this much attention he receives from Weibo users,” said another. “Nobody will steal his thunder.”

Weibo, a rough approximation of Twitter, is not China’s biggest social media platform – the Facebook-like WeChat holds that position – but it did record 230 million “daily active viewers” in March.

Global Times reported that Weibo users have nicknames for Trump, including “Dong Wang,” which it said means a self-claimed king who “knows everything.”

It said that according to statistics reported by The Paper, a Shanghai news outlet, topics related to Trump featured on Weibo’s trending list 589 times in 2020 – hundreds of times more than the topic in second place.

“The former U.S. president is the only foreigner in the annual list, with the rest of the top 20 places mostly taken by Chinese entertainment stars.”