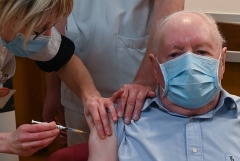 A 92-year-old Frenchman receives a dose of the Pfizer-BioNTech COVID-19 vaccine in Dijon, central France, on Sunday. (Photo by Philippe Desmazes/Pool/AFP via Getty Images)

(CNSNews.com) – With coronavirus vaccination programs rolling out across Europe at the weekend, authorities in France took a low-key approach in a country that has recorded both a high COVID-19 death toll and high levels of skepticism about a vaccine that has been developed in record time.

The first shots were given to 78-year-old woman in a hospital outside Paris, followed by a 65-year-old cardiologist at a nursing home. As in many other countries, the elderly, vulnerable, and frontline health workers are being prioritized. But unlike the case in some other countries, French authorities did not begin the program with fanfare or live television coverage of politicians getting the job.

Recent surveys have found that fewer than half of respondents in France said they plan to be vaccinated, among the lowest levels recorded in Europe. France also has the world’s seventh-highest COVID-19 death toll – more than 62,800 deaths – and the third-highest in Europe, after Italy and Britain.

In a series of tweets, President Emmanuel Macron sought to placate citizens’ concerns, stressing that getting vaccinated would be free, and not obligatory.

“We have a new weapon against the virus: the vaccine,” he said. “Hold together, again.”

“Let us have confidence in our researchers and doctors,” Macron said. “We are the land of the Enlightenment and of Pasteur. Reason and science must guide us.”

Louis Pasteur was the 19th century French biologist and chemist whose discoveries included the creation of vaccines for rabies, anthrax and other diseases.

Health experts have attributed the skepticism largely to concerns related to hepatitis B vaccinations in the 1990s. Despite fears that that vaccine may have triggered multiple sclerosis, the Centers for Disease Control says that “many scientific studies have been conducted, and have concluded that hepatitis B vaccination does not cause MS.”

Despite Macron’s assurances of voluntary COVID-19 inoculations, a draft law unveiled by the government last week indicated that those who do not get the vaccine may be prohibited from using public transport. The text, which must still be submitted to parliament, sparked criticism in some quarters, with the spokesman for the far-right National Rally party, Sebastien Chenu, accusing the government of planning to establish a “health dictatorship.”

Lawmakers on the left and in the center also voiced concerns about the implications of such measures, although a government minister said the bill would be debated.

Elsewhere in Europe the program began with more obvious enthusiasm than in France, with the Greek and Czech prime ministers among those making their inoculations public.

“Vaccination is the lasting way out of the pandemic,” European Commission president Ursula von der Leyen tweeted on Saturday, ahead of the beginning of mass vaccinations in a number of E.U. countries hard hit by the virus this year, including Spain, Italy, Germany, and Portugal.

E.U. regulators on December 21 approved use of the COVID-19 vaccine developed by Pfizer and BioNTech, one of the two approved by the Food and Drug Administration (FDA) for emergency use in the United States earlier this month. The developers earlier reported more than 95 percent effectiveness in phase three trials against the coronavirus that emerged in Wuhan, China about a year ago.

In the U.S., the level of concern about the safety and effectiveness of coronavirus vaccines appears to have ebbed somewhat.

A recent Gallup poll found that 63 percent of respondents in the U.S. indicated a willingness to get an FDA-approved, free vaccine, up from 50 percent in September and 58 percent in October.