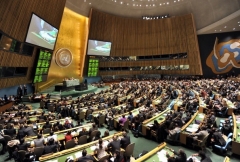 The U.N. General Assembly meets in New York in the pre-COVID 19 era. (Photo by Stan Honda/AFP via Getty Images)

(CNSNews.com) – For decades, the U.S. government has allowed a parade of despots to descend on New York each fall for the annual opening of the U.N. General Assembly session, but a group of Republican senators is urging President Biden to draw the line in the case of Iran’s newly-elected president.

A week before Ebrahim Raisi is due to take office, the group led by Sen. Tom Cotton (R-Ark.) wrote to Biden, drawing attention to the Iranian president-elect’s record of gross human rights abuses – most notoriously, his central role in the clandestine extrajudicial executions of thousands of dissidents in the late 1980s.

They wrote that if the U.N. moves ahead with its plan to allow some in-person attendance at this year’s session opening (last year’s was virtual, due to COVID-19), then “the White House should deny Raisi and other Iranian leaders visas to attend.”

“Allowing Raisi to travel to the United States – to the same city where the Iranian regime just tried to kidnap a U.S. citizen – would legitimize his repression, undermine America’s moral leadership, and potentially endanger our national security, given the likely presence of intelligence agents in the Iranian traveling party.”

“In 1988, during his tenure as the deputy prosecutor of Tehran, Raisi served on a four-member Death Commission which oversaw the killing of over 5,000 prisoners, including women and children,” they wrote.

“The Death Commission conducted interviews that lasted only minutes to determine a prisoner’s loyalty to the Islamic Republic of Iran, then sentenced them to death without a lawyer, right to appeal, or fair trial.”

Raisi went on to become the regime’s deputy chief justice and chief justice, a career marked by numerous abuses, including torture, the execution of juveniles, and the handing down of death sentences for Iranians peacefully protesting the rigged presidential election in 2009.

Under a 1947 “headquarters agreement” which established the permanent seat of the U.N. in New York, the U.S. agreed to allow foreign delegates to enter a demarcated zone for U.N. activities.

As a result, dozens of authoritarian leaders have been permitted to visit for U.N. events, with the likes of Cuban dictator Fidel Castro, Soviet leader Nikita Khrushchev, and Venezuela’s Hugo Chavez and Nicolas Maduro using the opportunity to denounce the United States while on U.S. soil.

But the senators noted in their letter that there has been a precedent for denying entry to foreign visitors.

“In 1988, the United States barred PLO Chairman Yasser Arafat from entering the United States to attend a meeting of the United Nations. In 2014, President Obama denied an entry visa to Iranian Ambassador Hamid Aboutalebi, who was involved in taking American diplomats hostage in 1979. In 2020, the United States declined to issue a visa for Iranian Foreign Minister Javad Zarif.”

They argued that Raisi’s role in the death commissions and the crackdowns on protesters, along with his association with the Islamic Revolutionary Guard Corps (IRGC), “should disqualify him from receiving a visa to the United States.”

The Trump administration in 2019 designated the IRGC as a foreign terrorist organization.

Raisi has himself been designated for U.S. sanctions, with the U.S. Treasury Department in doing so citing his involvement in the mass executions and the regime’s post-2009 election crackdown.

Raisi was named Iran’s next president in a June election marked by a historically low turnout, after the regime’s Guardian Council disqualified 580 candidates and allowed just seven to run. He is due to take office next Thursday.

The General Assembly high-level session is scheduled to begin on September 21.

As the Republican senators noted in their letter, the Reagan Administration in 1988 denied Arafat a visa, citing “associations with terrorism.” Even though he did not head a U.N. member-state, the General Assembly responded to the U.S. move by voting to hold a special session in Geneva, which Arafat attended and addressed.

In 2014 Iran named Aboutalebi as its ambassador to the U.N. but the move was blocked by Senate legislation introduced by Cruz, and signed into law by Obama.

Early last year the Trump administration barred Iran’s Zarif from entering to address a meeting of the U.N. Security Council. The meeting was taking place shortly after the killing by IRGC Qods Force commander Qassem Soleimani in a U.S. military drone strike, and Zarif would likely have used the occasion to address the killing of a man he described as a good friend.

Earlier, the administration imposed stringent restrictions on Iranian diplomats at the U.N., limiting their travel to movement between U.N. headquarters, the Iranian mission several blocks away, and the nearby residence of Iran’s ambassador.

Those regulations, which also applied to Zarif during a visit to New York in mid-2019, were lifted by the Biden administration last February, with a State Department official saying “the idea here is to take steps to remove unnecessary obstacles to multilateral diplomacy by amending the restrictions on domestic travel.”