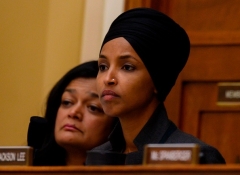 (CNSNews.com) – Several Republican lawmakers reacted positively to news of Thursday’s U.S. airstrikes against facilities used by Iranian-backed militias in eastern Syria, but there were some rumbles on the left.

“Also what is the legal authority for strikes?” Psaki asked at the time. “Assad is a brutal dictator. But Syria is a sovereign country.”

In a tongue-in-cheek reference to the latest airstrikes, left-wing journalist Glen Greenwald tweeted: “Delivered with empathy and compassion by a diverse cabinet” – a sentiment retweeted by the anti-war group Code PINK.

“These strikes are unconstitutional and dangerous,” said former Rep. Justin Amash, a Republican turned independent turned Libertarian. “There’s no general authority for a president to launch airstrikes, and President Biden hasn’t claimed they were necessary to stop an imminent attack. Our Constitution demands he get approval from the representatives of the people.”

The Pentagon said President Biden authorized the strikes in response to several recent attacks on U.S. and coalition forces in Iraq, including a rocket attack on a base in Erbil which cost the life of a civilian contractor and injured a U.S. service member.

Several Republican lawmakers voiced support for the action, with Sen. Marco Rubio (R-Fla.) describing it as “targeted, proportional and necessary,” and Sen. Rick Scott (R-Fla.) calling it “the right move” by Biden.

“The U.S. needs to be strong and continue applying max pressure on Iran to ensure American safety and security,” Scott added. “Another weak nuclear deal will only lead to more attacks.”

“Very supportive of this strike and hope it will create necessary deterrence in the future,” tweeted Sen Lindsey Graham (R-S.C.). “It is imperative that our enemies know that attacking Americans comes at a cost.”

“Responses like this are a necessary deterrent and remind Iran, its proxies, and our adversaries around the world that attacks on U.S. interests will not be tolerated,” said Rep. Michael McCaul (R-Texas), ranking member on the House Foreign Affairs Committee.

“I thank the president and our service members for protecting Americans overseas.”