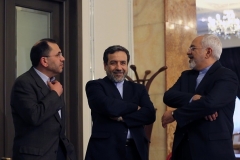 Iranian diplomat Majid Takht-Ravanchi, left, photographed in Tehran in 2015 with Foreign Minister Javad Zarif and chief negotiator Abbas Araghchi, was a key player in the multilateral talks that produced the Iran nuclear deal. (Photo by Atta Kenare/AFP via Getty Images)

(CNSNews.com) – The Iranian regime on Tuesday denied that any talks have been held thus far with the new U.S. administration, two days after a regional paper cited a source in the Iranian presidency as saying that secretive, informal contacts have occurred both before and since President Joe Biden’s inauguration.

“At present, no talks have been held with the new U.S. administration,” government spokesman Ali Rabiee told reporters in Tehran. “We are waiting for the U.S.’ official stance on the JCPOA,” he added, referring to the Obama-era nuclear deal, the Joint Comprehensive Plan of Action.

On Sunday, the Kuwaiti newspaper Al-Jarida published a lengthy article citing a source in President Hassan Rouhani’s office as saying “informal” contacts began prior to January 20 and were ongoing.

It described its source as someone who was essentially “supervising communication with the Biden team,” and who said the Biden team had recommended that the contacts not be made public until important administration appointments had been confirmed.

The paper’s source named Iranian ambassador to the U.N., Majid Takht-Ravanchi, as a key player, saying that he had relationships “with members of Biden’s team who had participated in previous secret negotiations with Tehran.”

National Security Advisor Jake Sullivan took part in back-channel talks with the Iranians in Oman in 2012 and 2013. At the time, he served as Biden’s national security advisor, after being director of policy planning at the Clinton State Department.

Then-Vice President Biden in early 2013 told an international audience that the Obama administration would not hold talks with the Iranians in secret, although it was later revealed that it had done so, both before and after Biden gave that assurance at the Munich Security Conference.

France’s Le Figaro reported on the day before the inauguration that secret “discussions” have been underway in New York between Takht-Ravanchi and “an envoy of the Biden administration,” basing the claim on a source with “access to circles of power in Tehran.” Iranian Foreign Minister Javad Zarif called the French report “baseless.”

On Monday, Takht-Ravanchi – who according to posts on his Twitter feed was in Tehran for consultations from January 6-19 – told NBC News that “there has not been any conversation between Iran and the U.S. after Biden came into office.” He did not say whether any contacts had been made in the preceding weeks.

In his former post as deputy foreign minister for European and American affairs, Takht-Ravanchi was one of Iran’s main negotiators in the talks that produced the JCPOA in 2015.

President Trump withdrew from the deal, and the regime in response began to breach its obligations. Biden has pledged to reenter it, if Iran reverses those moves.

The sequencing of steps will be a key question. Iran has demanded an immediate lifting of all sanctions Trump reimposed after exiting the deal, and Rabiee suggested that the regime expects a quick decision.

“The U.S. will not have all the time in the world,” he said. “We are waiting for the official announcement of their stance as well as the lifting of sanctions.”

Zarif, visiting Moscow on Tuesday to “coordinate our stances” in the new situation following Trump’s departure, said alongside this Russian counterpart Sergei Lavrov that Iran was awaiting action from the Biden administration.

Iran was ready to respond appropriately” once the U.S. ends “the illegal sanctions,” Zarif said.

Separately, he pushed back against calls for the regime to make the first move. France’s foreign minister had called on Iran immediately to comply with its obligations, but Zarif in a responding tweet asked “why on earth should Iran” be first to show a goodwill gesture, after four years of “brutal U.S. economic terrorism.”

“It was the U.S. that broke the deal – for no reason,” he said. “It must remedy its wrong; then Iran will respond.”

In the Al-Jarida article, the Iranian presidency source laid out non-negotiable conditions for the regime relating to the JCPOA.

They included a full lifting of U.S. sanctions before Tehran returns to its commitments contained in the deal; compensation for losses incurred as a result of the reinstated sanctions; U.S. guarantees that a future administration will not again exit the agreement; a refusal to link the JCPOA with issues such as Iran’s ballistic missiles program or regional activities; and no addition of new parties to the agreement.

The JCPOA negotiating parties were Iran and the P5+1 group – the U.S., Britain, France, Russia, China and Germany. Iran is leery at the prospect that U.S. allies in the Gulf or Israel might be brought into the process.

Two top Biden nominees indicated during their Senate confirmation hearings that the administration was not expecting quick progress with Iran.

“I think we’re a long way from there,” said then-secretary of state nominee Antony Blinken, while Avril Haines, nominated as Director of National Intelligence (DNI), said in relation to Iran returning to compliance with the JCPOA, “I think frankly we’re a long ways from that.”

Blinken and Haines have both since been confirmed.