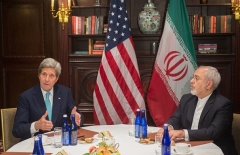 Then-Secretary of State John Kerry and Iranian Foreign Minister Javad Zarif, photographed in New York in 2016, led their respective negotiating teams in the talks that produced the JCPOA. (Photo by Bryan R. Smith/AFP via Getty Images)

(CNSNews.com) – Three days after the Biden administration declared itself ready to hold talks with Iran and its nuclear deal partners, the regime’s foreign minister indicated Sunday that the U.S. must lift all of its sanctions before any meeting can take place.

“The United States will not be able to rejoin the JCPOA before they remove the sanctions,” Javad Zarif told Iran’s Press TV, referring to the 2015 Joint Comprehensive Plan of Action (JCPOA), which President Trump exited in 2018.

“All the sanctions have to be removed. The United States must gain re-entry to the JCPOA. It’s not automatic; it’s not a revolving door.”

In a tweet later, Zarif reinforced the point, using Twitter hashtag shorthand: #CommitActMeet.  He said the “logical sequence” for progress was for the U.S. first to “commit” to the JCPOA and to “act” on its obligations under the agreement, before the sides could “meet.”

“As the offending side, U.S. must take corrective measures” by committing to the JCPOA and fulfilling its commitments, he said.

“Iran would reciprocate immediately by reversing its remedial measures,” he added, using a euphemistic term to refer to the regime’s violations of the agreement which sought to place curbs on its nuclear activities. The regime maintains that those actions are in keeping with the terms of the deal, following the U.S. withdrawal in 2018.

In its most recent initiative aimed at pressurizing the U.S., Iran announced its intention last week to limit International Atomic Energy Agency inspectors’ abilities to access suspect sites at short notice, by ending its compliance with the “Additional Protocol” of the nuclear Non-Proliferation Treaty.

IAEA director-general Rafael Grossi visited Tehran on Sunday in an attempt to get the regime to back down on its threat, but upon returning to Vienna late on Sunday night he confirmed that Iran would shortly begin to provide “less access” to inspectors. Zarif told Press TV that footage from surveillance cameras installed at sites under the protocol would no longer be available to the IAEA.

On Thursday, the Biden administration said it was ready to join talks with Iran and the other JCPOA parties – Britain, France, Russia, China and Germany – “to discuss a diplomatic way forward on Iran’s nuclear program.”

It also took two other steps which it said were “intended to remove unnecessary obstacles to diplomacy”: It informed the U.N. Security Council that it was withdrawing the Trump administration’s determination that U.N. sanctions on Iran, which were terminated under the nuclear deal, had been “snapped back” because of Iran’s non-compliance, and it informed the Iranian mission to the U.N. that it was lifting strict travel restrictions placed on its diplomats in 2019.

National Security Advisor Jake Sullivan told CBS’s “Face the Nation” on Sunday that “Iran has not yet responded” to the offer of talks.

Sullivan said Biden was “determined to prevent Iran from getting a nuclear weapon” and “believes that hardheaded, clear-eyed diplomacy is the best way to do that.”

“And so he’s prepared to go to the table to talk to the Iranians about how we get strict constraints back on their nuclear program,” he said. “That offer still stands because we believe diplomacy is the best way to do it. Iran has not yet responded.”

‘There won’t be any renegotiation, period’

Biden has pledged to re-enter the JCPOA, once Iran returns to its commitments, and then use the deal as a foundation or “platform” for a broader deal addressing concerns such as Iran’s ballistic missile programs and its military intervention in regional conflicts.

Why he thinks Tehran would be prepared to do that is unclear; the Obama administration gave up on extending negotiations into those areas because the regime was insistent that they remain off the table. Iran had Russia's backing for that stance. Iranian officials have said repeatedly that the agreement cannot be reopened or widened, a position Zarif reiterated on Sunday.

“Absolutely not,” he told Press TV in response to a question on the issue. “There won’t be any renegotiation, period. Not before they [re]enter, not after they enter. This is a solid agreement, endorsed by a Security Council resolution. End of story.”

Zarif had contemptuous words for U.S. efforts to pressure Iran over the years.

“It may work some other places. It doesn’t work in a country with millennia of history.”

“It may be difficult for some to comprehend in Washington, but we have had an empire, a global empire, that lasted longer than the United States, than the history of the United States,” Zarif said. “So for us these ups and downs in history are brief moments.”

The Islamic Republic came into existence 42 years ago. Prior to that, Persia was ruled by a succession of monarchies and dynasties for more than 2,500 years, from Cyrus the Great until the Islamic revolution deposed the last Shah in 1979.