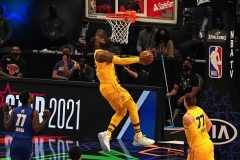 LeBron James leads his team to victory during the NBA All-Star Game in Atlanta, Georgia on Sunday. (Photo by Timothy A. Clary/AFP via Getty Images)

(CNSNews.com) – Ahead of Sunday’s National Basketball Association’s All-Star Game in Atlanta, NBA Commissioner Adam Silver defended the ongoing business relationship with China, while declaring that “our values remain the same.”

Reports that China’s state television network CCTV had agreed to air Sunday’s game and ancillary competitions prompted questions in some quarters about the nature of the arrangement that made the coverage possible.

CCTV in 2019 suspended cooperation with the league after the head of an NBA franchise tweeted support for pro-democracy protestors in Hong Kong. Although the network did agree to broadcast the final two games of the season last October, Chinese media outlets said the recent decision to cover the All-Star Game means CCTV will now return to regular live broadcasts of NBA games.

The Chinese Communist Party daily Global Times quoted leading Chinese basketball reporter Zhao Huanyu as saying that the CCTV broadcast of the All-Star Game marks the beginning of its resumption of coverage as usual of NBA fixtures.

But during a pre-All-Star Game press briefing on Saturday, Silver played down the significance of CCTV covering Sunday’s game, noting that it had broadcast the two final games of last season. Silver also pointed out that the streaming company Tencent has continued to carry NBA games.

“Our business has continued there,” he said. “You know, for me, no different from the reason we conduct all-star here in the United States, for fan engagement. We have hundreds of millions of fans in China and we see it as our business to serve those fans.”

“And my – our general philosophy and our mission is, if we can improve people’s lives through basketball we think it’s appropriate for us to be continuing to export our games to China.”

“You know, our values remain the same, and – and our business continues. And it’s largely the business of exporting American basketball and the culture that comes with it to China,” Silver said.

“And it’s enjoyed, as I said, by tens of millions if not hundreds of millions of people in China, who continue to watch it. And so that’s our current status.”

In a letter to Silver on Thursday, Sen. Marsha Blackburn (R-Tenn.) asked him to disclose the details of the NBA’s reported agreement with CCTV that led to the broadcasting decision.

“Please highlight any details or regulations the NBA has to adhere to per these negotiations with CCTV, especially in regards to speaking on topics related to Tibet, Inner Mongolia, Hong Kong, Taiwan, the South China Sea, and the Xinjiang region,” she wrote.

Blackburn also posted a tweet saying, “The NBA will play ball with Communist China because it doesn’t want to lose out on a TV deal worth hundreds of millions of dollars, even as thousands of Uyghurs sit in concentration camps.”

In a weekend Fox News appearance, Blackburn said she has heard nothing back from the NBA.

“Haven’t heard a word. The NBA is very silent about what kind of an agreement they have worked out,” she said. “Now, China TV took them off the air because they had criticized the Chinese Communist Party because of the treatment of the Hong Kong freedom fighters.”

“Or I should say, there were individuals connected to the NBA that had issued that criticism,” she added, in apparent reference to then-Houston Rockets general manager Daryl Morey, whose Hong Kong tweet caused the kerfuffle in 2019.

Blackburn said she wants to know if Silver “is going to censor his players and coaches and staff if they criticize the Chinese Communist Party? What is he doing to have gained the favor? What is the monetary benefit?”

A year ago, Silver said during the 2020 All-Star weekend that the league could lose up to $400 million in revenue during the year because of the rift with China.

The 2019 row erupted in the midst of months-long protests by Hong Kong residents about the erosion of freedoms promised to the former British colony when it returned to Chinese rule in 1997.

The tweet posted by Morey, featuring the words, “Fight For Freedom. Stand With Hong Kong,” caused an uproar in China and the CCTV decision to suspend cooperation with the NBA.

Morey deleted the tweet and posted an apology, and an NBA spokesman issued a brief statement saying in part it acknowledged that the views voiced by Morey “have deeply offended many of our friends and fans in China, which is regrettable.”

The NBA was criticized for taking a stance that was seen as more apologetic about Morey’s position than supportive of his right to air it. A group of Republican and Democratic lawmakers urged the NBA to make clear its support for the right of players, staff, partners and fans in America to express their opinions.

Silver issued a second NBA statement, saying that it was “inevitable that people around the world – including from America and China – will have different viewpoints over different issues.  It is not the role of the NBA to adjudicate those differences.”

“However, the NBA will not put itself in a position of regulating what players, employees and team owners say or will not say on these issues. We simply could not operate that way.”

CCTV complained about NBA statement, saying that freedom of speech “does not include speech that challenges China's national sovereignty and social stability, and the argument provided by Morey and Silver reflects their contempt for the Chinese people.”

“If the NBA wants to repair its damaged relationship with China and its legions of basketball fans, it should reflect on the disrespect it has shown towards the country's sovereignty,” it said.