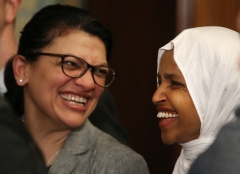 (CNSNews.com) – With one of the first two Muslim women elected to Congress presiding, the U.S. House on Wednesday voted for a measure that would repeal President Trump’s travel proclamations, which critics continue to label the “Muslim ban.”

Rep. Rashida Tlaib (D-Mich.) announced the vote result, 233 votes to 183, then expressed her delight with a small clap.

She said in a tweet afterwards that she “couldn’t help but celebrate. The smile under the mask was huge.”

Rep. Judy Chu (D-Calif.), who introduced the original NO BAN Act last year, celebrated with a tweet: “And with 233 votes, history has been made as the House of Representatives votes to repeal Donald Trump’s hateful Muslim Ban! Now onto you, Senate.”

The administration says decisions on which countries’ nationals to restrict are based on their governments’ capacity and willingness to cooperate in security vetting and information-sharing, significant terrorist presence in the countries concerned, in addition to U.S. foreign policy, national security, and counterterrorism goals.

The current version of the travel proclamation bars entry into the U.S. of certain categories of nationals of 13 countries.

Eight have Muslim majorities – Iran, Kyrgyzstan, Libya, Nigeria, Somalia, Sudan, Syria and Yemen – and the other five do not. They are Burma, Eritrea, Tanzania, North Korea and Venezuela.

(Six of the eight Muslim-majority countries were identified as terrorism “countries of concern” by the Obama administration in 2016, and were as a result affected by restrictions relating to the visa waiver program.)

Although the vast majority of the 57-member Organization of Islamic Cooperation states are not affected, critics characterize it as a measure discriminating of grounds of religion – a “Muslim ban.”

(The Council on American-Islamic Relations has taken to referring to “Muslim and African bans,” although that doesn’t account for the inclusion of Burma, North Korea, and Venezuela.)

Presumptive Democratic presidential nominee Joe Biden tweeted, “Today, the House passed the #NoBanAct because no one should be discriminated against or singled out based on the faith they practice. I will end President Trump's Muslim Ban on day one and sign this bill into law.”

Demonstrators outside the Supreme Court on the day it heard arguments in a case against President Trump’s travel proclamation. (Photo by Andrew Caballero-Reynolds/AFP/Getty Images)

The House had been scheduled to vote on the legislation last March, but Democratic leaders pulled it at short notice, amid concerns about the optics of moving ahead at a time Trump was imposing travel restrictions in response to the coronavirus pandemic.

Republicans had drawn attention to the fact that the legal authority targeted by Chu’s legislation, section 212(f) of the Immigration and Nationality Act (INA), was the same authority used by Trump in denying entry to foreigners from the early COVID-19 hotspots of China and then Europe.

The text did incorporate a “public safety” exception provision, but an amendment was then inserted to make clear that would include “efforts necessary to contain a communicable disease of public health significance.”

Some critics of Trump’s travel proclamations were unhappy about the amendment.

“CAIR and many other civil rights organizations disagree with those changes given the long history and stigma of immigrants be[ing] wrongly labeled as health risks which result in discriminatory policies,” said the Council on American-Islamic Relations, which calls itself the nation’s biggest Muslim civil rights and advocacy group.

Planned Parenthood Action Fund said that adding the “communicable disease” language “plays into a long tradition of racist and xenophobic attitudes towards immigrants as health risks – stereotypes that have been weaponized by the Trump administration since the pandemic began.”

“The newly added language only stokes false narratives, which contribute to increased violence against Asian American communities, and could lead to new discriminatory policies,” it said.

The coronavirus outbreak emerged in China late last year before spreading across the globe. From February 2, Trump barred entry to all non-U.S. nationals – irrespective of ethnicity or nationality – who had visited China in the previous 14 days. At the time at least 21 other countries had begun to enforce similar measures.

On March 11 Trump expanded that restriction to apply to 26 European countries.

“The only thing now standing in the way of Congress adopting the NO BAN Act is the willingness of U.S. Senate Republican leadership to show some moral backbone and fight back against Trump’s discriminatory, hateful, and un-American Muslim and African bans,” he said.

The legislation is unlikely to advance in the GOP-controlled Senate, and the White House has already indicated that the president would veto it if it arrived on his desk.

Among other things, the White House said in a statement of policy in March, the president’s authority to restrict travel into the U.S. “has been central to the Administration’s ongoing efforts to safeguard the American people against the spread of COVID-19.”