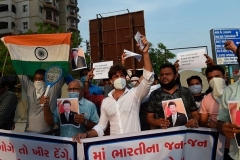 Indians protest in Ahmedabad on Tuesday against the killing of Indian soldiers in a clash with Chinese troops along their disputed border. (Photo by Sam Panthaky/AFP via Getty Images)

(CNSNews.com) – Armed with clubs, rocks and nail-studded bamboo sticks, Chinese troops clashed with Indian soldiers along a disputed Himalayan border this week, killing an Indian commander officer and 19 others in the first deadly border clash between the nuclear-armed neighbors in more than four decades.

The Indian Army said there had been casualties on the Chinese side as well, although the People’s Liberation Army (PLA) gave no details.

Beijing is known for tightly controlling sensitive information, although the Chinese Communist Party-affiliated Global Times, in an editorial accusing India of “arrogance and recklessness,” claimed that the PLA had not released any Chinese casualty details “to avoid comparing and preventing confrontational sentiments from escalating.”

For six weeks tensions have been simmering in the area, where India and China differ over the exact location of the border between their territories, known as the Line of Actual Control (LAC).

In a bid to prevent armed flare-ups, both sides have agreed soldiers will not to carry firearms and ammunition while patrolling in the area – weaponry is deployed, but further back – therefore the unconventional nature of this week’s bloody clash.

Citing military sources, the Indian Express said when Indian forces on the night of June 15-16 challenged Chinese troops over the building of a new post in an agreed-upon buffer zone, Chinese soldiers attacked, using “sticks, clubs, bats, bamboos with nails during the fight,” with the Indian soldiers quickly retaliating.

“In the fight, some soldiers either fell or were pushed into the river, officers said. Some bodies were recovered from the river while others had signs of being brutalized. A few soldiers died of hypothermia.”

The Indian Army’s initial report on the clash said an officer and two soldiers had died.

It subsequently reported that “17 Indian troops who were critically injured in the line of duty at the standoff location and exposed to sub-zero temperatures in the high-altitude terrain have succumbed to their injuries, taking the total that were killed in action to 20.”

“Indian Army is firmly committed to protect the territorial integrity and sovereignty of the nation,” it said in a statement.

On the Chinese side, a spokesman for the PLA’s Western Theater Command accused Indian troops of crossing the border and launching “provocative attacks,” resulting in “fierce physical confrontations and casualties.”

“We demand that the Indian side strictly restrain its front-line troops, immediately stop all infringements and provocative actions, and work together with China to return to the correct track of dialogue and talks to resolve differences,” said Senior Colonel Zhang Shuili.

He claimed that the area in question had “always” been Chinese territory – a point long contested by India.

The CCP’s Global Times, a tabloid known for its nationalist rhetoric, said in its editorial that Indian “arrogance and recklessness” was the main reason for tensions along the border.

It said that the Indian government believes China “lacks the will” to respond to Indian provocations, and that “some Indian people mistakenly believe their country’s military is more powerful than China’s.”

“These misperceptions affect the rationality of Indian opinion and add pressure to India’s China policy.”

‘The kinds of actions that authoritarian regimes take’

The deadly clash comes at a time of increased tensions between China and the United States, which in turn has strong relations with India.

Late last month, President Trump tweeted, “We have informed both India and China that the United States is ready, willing and able to mediate or arbitrate their now raging border dispute.”

Global Times responded with an editorial saying China and India have no need for Trump’s help.

“The two countries should keep alert on the U.S., which exploits every chance to create waves that jeopardize regional peace and order,” it said.

Days later, Secretary of State Mike Pompeo during an American Enterprise Institute podcast interview mentioned the China-India border issue in the context of broader troubling Chinese behavior, including in Hong Kong and the South China Sea.

“We see even today increasing forces of China moved up to the north of India on the line of actual control there on the Indian border,” he said. “These are the kinds of actions that authoritarian regimes take.”

“We’ve seen over the past number of years continued Chinese build out of their military capabilities, and then continually more aggressive action,” Pompeo said. “I mentioned India.”

Trump and Indian Prime Minister Narendra Modi spoke by phone on June 2, and according to the Indian readout, the border tensions were among the issues discussed.

When asked about the Trump-Modi phone call, Chinese foreign ministry spokesman Zhao Lijian said that China and India “are capable of properly resolving relevant issues through dialogue and consultation. There is no need for any third party to intervene.”