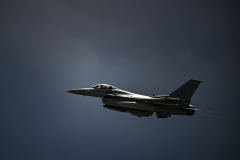 (CNSNews.com) – Days after President Biden reaffirmed his support for selling F-16 fighter jets to Turkey, Sen. Lindsey Graham (R-S.C.) returned from a visit to the country, vowing to do all in his power to ensure the deal goes through.

Graham, who met with President Recep Tayyip Erdogan’s chief advisor, Ibrahim Kalin, acknowledged that the U.S. and Turkey “have had a problematic relationship at times” but said it was imperative to strengthen bilateral ties.

“These fighter jets, in the hands of our NATO allies, will create a sense of stability and provide capability to the Turkish military that is most definitely in America’s national security interests,” he said.

The administration’s plan faces potential opposition in Congress, however. Some lawmakers from both parties are frustrated by Erdogan’s behavior, including his maneuvering over recent weeks to hold up applications by Sweden and Finland to join NATO, purportedly over disputes about Kurds and “terrorism.”

Unnerved by Russian President Vladimir Putin’s invasion of Ukraine, Sweden and Finland applied in the spring to join NATO. After threatening to stand in their way, on the eve of the alliance’s summit in Madrid last week Erdogan reached an agreement with the two Nordic governments, and lifted his veto.

He then met with Biden on the summit sidelines, and Biden told reporters later that he had restated his support for an F-16 sale. Without having been specifically asked, he volunteered the information that there had been “no quid pro quo.”

“I said back in December, as you’ll recall, we should sell them the F-16 jets and modernize those jets as well,” Biden said during his end-of-summit press conference. “It’s not in our interest not to do that. And I indicated to them that I’ve not changed my position at all since December.”

“And there was no quid pro quo with that; it was just that we should sell,” he added. “But I need congressional approval to be able to do that, and I think we can get that.”

Turkey last fall asked the U.S. to sell it 40 F-16 Fighting Falcons, as well as around 80 Lockheed Martin kits to modernize outdated F-16s that it already has in its fleet, in a deal worth some $6 billion.

That request came after the Trump administration in 2019 removed Turkey from the F-35 joint strike fighter program, in response to Erdogan’s purchase of Russian S-400 missile defense systems in the face of strong U.S. and NATO objections.

Coming amid a series of disputes in relations with the U.S. over a number of years, Erdogan’s defiance of his NATO allies over the S-400 purchase riled his critics in Congress.

He did help his cause when he said publicly that if the U.S. delays on the request for F-16s, he would turn to Russia as an alternative supplier.

As such, the administration’s plans to sell F-16s to NATO’s most fractious ally has its critics.

“We shouldn’t be encouraging Erdogan’s human rights abuses and his disloyalty to the NATO alliance. I’ll continue to work with my colleagues to block this dangerous proposal and hold Turkey accountable.”

“Erdogan repeatedly acts contrary to American interests, with his dangerous behavior contributing to the instability of the region,” he said. “For all these reasons, we absolutely must not sell Turkey F-16s or F-16 modernization kits.”

“We must not forget that Turkey uses their current air fleet to violate the sovereignty of a reliable NATO member and ally, Greece, and that such a modernized force could be used to support their illegal occupation of Northern Cyprus,” said the caucus’ other co-chair, Rep. Carolyn Maloney (D-N.Y.).

She noted that Turkey still possesses the Russian S-400 systems that cost it its participation in the F-35 program.

“We must continue to hold Erdogan accountable for violations of U.S. law, human rights, and the security of our ally Greece – not reward him,” Maloney said.

“Expansion of NATO requires unanimous agreement by all NATO member-states of course,” he said in an opening statement. “And with time of the essence, the eleventh-hour concerns by Turkey standing in the way of this process only serve Putin’s interests.”

During subsequent questioning of two senior administration officials testifying at the hearing, Menendez voiced concern about attempts by Erdogan to use his leverage to extract concessions from the two aspirants – or from the United States.

“I don’t know what Turkey’s trying to extract from them, but at the end of the day that’s what this is about,” he said.

“And maybe if we get in the game they want to extract from us too, which I will be vehemently opposed to.”

Turkish Foreign Minister Mevlut Cavusoglu told Turkey’s NTV broadcaster on Monday that the talks with Biden about the F-16s had been “very positive,” and that despite some opposition in Congress, “we do not see a negative picture at the moment.”