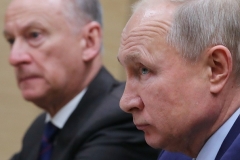 (CNSNews.com) – Remarks by a senior security official close to Russian President Vladimir Putin have called into question the notion that the Kremlin has narrowed its war aims in Ukraine and would be content to stop once the eastern Donbass region is under its control.

Since Russian forces were pulled back from areas near Kyiv in late March, redirecting the thrust of the offensive towards the Donbass regions of Donetsk and Luhansk, many observers concluded that the unexpectedly robust Ukrainian resistance had forced Putin and his generals to lower their sights, and limit the operation to capturing territory in the east.

But Nikolai Patrushev, secretary of Putin’s Security Council, on Tuesday laid out as the goals of the invasion virtually the same objectives as Putin did when he launched his “special military operation” last February.

Speaking at a national security meeting in the Siberian city of Khabarovsk, Patrushev listed these as: protecting people at risk of genocide at the hands of the “neo-Nazi regime” in Kyiv, demilitarizing and “de-Nazifying” the territory of Ukraine, and ensuring that it commits to remaining neutral – this is, not joining NATO – a stance which he said should be enshrined in the Ukrainian constitution.

Those goals, Patrushev said, “will be achieved despite the U.S. and the West providing military assistance to Ukraine.”

In his February 24 speech declaring the invasion, Putin said, “The purpose of this operation is to protect people who, for eight years now, have been facing humiliation and genocide perpetrated by the [Kyiv] regime. To this end, we will seek to demilitarize and de-Nazify Ukraine, as well as bring to trial those who perpetrated numerous bloody crimes against civilians, including against citizens of the Russian Federation.”

Since the Kremlin characterizes the government of President Volodymyr Zelenskyy as a “neo-Nazi regime,” the stated goal of “de-Nazifying” (and demilitarizing) Ukraine was widely understood to mean toppling that government and installing one more amenable to Moscow.

Patrushev’s remarks in Khabarovsk are significant because of the position he holds in Putin’s inner circle. A former director of the Federal Security Service (FSB) – the successor to the Soviet KGB – Patrushev has been secretary of the Security Council since 2008.

He was sanctioned by the U.S. in 2018, and again when Russia invaded Ukraine in February, with the U.S. Treasury Department describing him and others targeted as “elites close to Putin.”

Patrushev’s comments came two days after Defense Minister Sergey Shoigu reported to Putin that the territory of the so-called Luhansk “people’s republic” in Donbass was now in Russian hands. 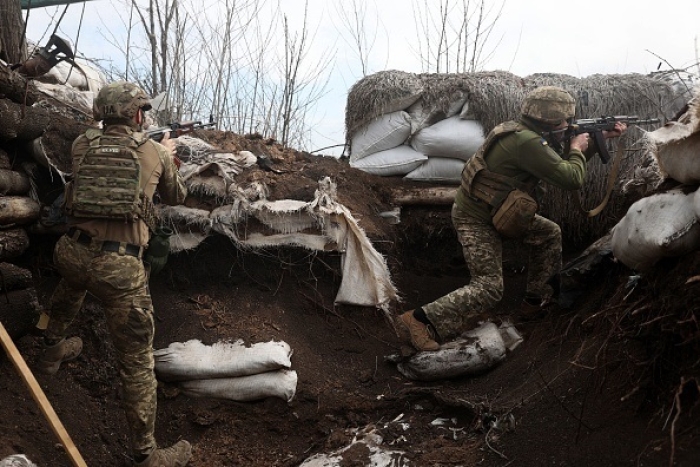 Ukrainian soldiers on the front line with Russian forces in the Luhansk region of the eastern Ukraine Donbass in April. Moscow claimed this week to have taken control of the region. (Photo by Anatolii Stepanov/AFP via Getty Images)

Luhansk and the neighboring region of Donetsk are where Russian-backed separatists have been fighting the central government since 2014. Putin recognized their “independence” just days before the invasion began.

According to the Kremlin, Putin when receiving Shoigu’s report instructed him to ensure that other Russian forces involved in the Ukraine campaign “carry out their tasks according to the previously approved plans.”  He did not elaborate.

An assessment by the Institute for the Study of War (ISW) said Patrushev’s statement was “noteworthy because of its timing and his position as a close confidante of Putin.”

“Patrushev is very unlikely to stray far from Putin’s position in his public comments given his relationship with Putin and his role in the Kremlin,” ISW said.

“His restatement of virtually the same maximalist objectives that Putin laid out before the invasion even as Russian forces seemed to be closing in on the more limited objectives of securing Donetsk and Luhansk oblasts – which Putin and other Russian leaders had hinted were their new aims following their defeats around Kyiv – strongly suggests that those hints did not reflect any actual change in Kremlin policy.”

“Patrushev’s statement significantly increases the burden on those who suggest that some compromise ceasefire or even peace based on limited additional Russian territorial gains is possible, even if it were acceptable to Ukraine or desirable for the West (neither of which is the case),” ISW argued.

Both the State Department and White House on Tuesday played down the Russian advances in the Donbass, portraying the military campaign as not going as Moscow had hoped.

“When this started on February 24, Vladimir Putin went into Ukraine, we think, with every intention of being the de facto leader of Ukraine within a matter of days, if not a matter of hours,” said State Department spokesman Ned Price.

“So even as this grinding battle goes on in the Donbass, what is already clear is that this has been and this will be a strategic failure for the Kremlin, given its going-in position.”

Price noted that the United States alone has accounted for nearly $7 billion in security assistance to Ukraine since Russian invaded.

Russian advances in the Donbass do no mean that they “have been able to achieve their goals” or that the Ukrainians have stopped fighting, White House Press Secretary Karine Jean-Pierre said during a briefing.

“We have given them the most amount of support than any other country as it relates to security assistance,” she said. “And that is not going to stop.”