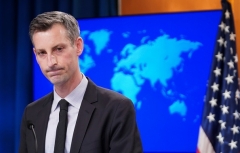 (CNSNews.com) – The United Nations and leading human rights advocacy groups are condemning Iran’s crackdown on protests in the country’s southwest, but reaction from the Biden administration – engaged in attempts to revive the nuclear deal – has been relatively muted.

Protests in Khuzestan province over severe drinking water shortages and dissatisfaction with regime policies are now in their tenth day.

In solidarity with compatriots in Khuzestan, an oil-rich but drought-hit region that is home to the Ahwazi Arab ethnic minority, Iranians have reportedly been demonstrating over the weekend hundreds of miles away, in the country’s north-western Azerbaijan province and in North Khorasan province in the far north-east.

At least eight people are reported to have been killed, as authorities use live ammunition at times to disperse crowds.

The regime has also restricted Internet services in an apparent bid to prevent social media platforms being used as mobilization tools. The digital rights monitoring group NetBlocks reported that a “significant regional disruption to mobile Internet service in Iran” began on July 15 – the day the protests in Khuzestan erupted.

It said the restrictions were “likely to limit the public’s ability to express political discontent or communicate with each other and the outside world.”

Although access to safe drinking water is a basic human right, she said on Friday, “instead of heeding the legitimate calls by its citizens for that right to be upheld, the authorities have for the most part concentrated on oppressing those making those calls.” 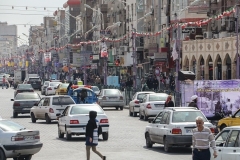 A street scene in Ahvaz, capital of the southwestern Iranian province of Khuzestan. (Photo by Atta Kenare/AFP via Getty Images)

“The situation is catastrophic, and has been building up for many years. The authorities need to recognize that and act accordingly. Shooting and arresting people will simply add to the anger and desperation.”

Bachelet said Iranian “security forces appear to have reacted with disproportionate force against unarmed and peaceful protesters, leading to the killing of at least four individuals, including one minor, and injuries to several others. In addition, state media has reported that one police officer has been killed.”

She referred to the possibility that the actual death toll may be higher than that.

Amnesty International said it had confirmed the deaths of at least eight protesters and bystanders, including a teenage boy. It accused the regime of using “unlawful force” against protestors, while Human Rights Watch reported the use of “excessive force.”

In Washington, the State Department’s response to the protests and regime’s actions has been low-key since the unrest began in mid-July. The department is engaged in a sensitive negotiations process in Vienna, designed to return the U.S. and Iran to compliance with the Obama-era nuclear deal from which President Trump withdrew in 2018.

Since July 15, the department has posted 73 statements on its website dealing with numerous situations around the world, but none has related to the Iran protests.

Similarly, the website of the U.S. “virtual embassy” to Iran, which was established during the Obama administration to engage directly with the Iranian people in the absence of diplomatic relations, carries no statement on the issue.

The only comments on the protests that have been made at State Department daily press briefings have come in response to specific questions from reporters.

The thrust has been that the U.S. is “closely” watching the situation and “urging” the regime to support the Iranian people’s rights to assemble peacefully and express themselves. But spokespeople have not used words like “condemn” in response to the regime’s actions. (That word has been used in briefings since July 15 in response to armed attacks in Afghanistan and Iraq, and regime repression in Cuba.)

On July 16, principal deputy spokesperson Jalina Porter said in response to a question, “we’ve certainly seen the reports of Iran shortages and resulting protests, and we continue to urge the Iranian government to support the Iranian people as they exercise their universal rights to freedom of expression as well as freedom of peaceful assembly.”

On July 21, spokesman Ned Price said when asked about the situation, “We are closely following reports of protests in Iran’s Khuzestan province, including reports that security forces have fired on these protesters. We support the rights of Iranians to peacefully assemble and to express themselves. Iranians, just like any other people, should enjoy without – should enjoy those rights without fear of violence, without fear of arbitrary detention by security forces. And so we’re monitoring this very closely.”

Two days later, Porter again said in response to a question that the Iranian people have a right to peacefully assemble and express themselves, adding that they “should be able to do so without fear of violence or arbitrary detention by security forces.”

She referred to the Internet shutdowns, and “urged the regime to allow citizens to freely access information online.

On factors driving the protests, Porter added that “years of government neglect and a mismanagement of water resources have exacerbated the worst drought Iran has faced in at least 50 years.”

According to the exiled National Council of Resistance of Iran (NCRI) opposition group, which says it has a network of sources across the country, the demonstrations have at times seen protestors chanting slogans against the regime and supreme leader Ayatollah Ali Khamenei.

It said anti-riot police have responded by firing shotguns and deploying teargas and pepper spray.