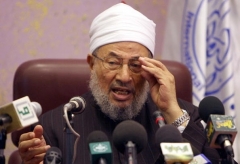 (CNSNews.com) – On the day America marked the 20th anniversary of the 9/11 terrorist attack, an international group of Islamist scholars founded by a Muslim Brotherhood theologian endorsed the Taliban regime that seized power last month, urging all Afghans to support it.

The International Union of Muslim Scholars (IUMS) congratulated Muhammad Hassan Akhund, “prime minister of the Islamic Emirate of Afghanistan,” on the trust which it said the Taliban “and other Afghan parties” had assigned to him to head the new government.

“The Union asked Allah almighty to guide him in leading the brotherly Afghan people to achieve all their aspirations and wishes for security, stability, unity and prosperity,” it said, adding its hopes “that the new government would present an Islamic model of good governance.”

The Arabic statement ended with an appeal to all Afghans to support, advise, and cooperate with the regime, and by affirming its own “keenness to cooperate fully and to provide everything that can be presented to the new government.”

With its headquarters in Qatar, the IUMS claims to represent “90,000 scholars and hundreds of millions of Muslims.” Its Arabic Twitter feed has almost half a million followers.

The IUMS was founded 2004 by the Qatar-based Egyptian cleric Yusuf al-Qaradawi, the Muslim Brotherhood spiritual leader who has stoked controversy with support for Palestinian suicide bombings, and who was listed as a terrorist supporter by Saudi Arabia, Egypt, the UAE and Bahrain in 2017.

Qaradawi chaired IUMS until stepping down, aged about 93, in 2018, succeeded by Islamist Moroccan cleric Ahmed al-Raissouni. Qaradawi contracted COVID-19 last spring but the IUMS denied rumors that he had died, and he appears to continue to play a prominent role, with his messages continue to appear in its social media feeds, as recently as Saturday.

The IUMS’ endorsement of the Taliban regime was touted on Twitter by Taliban spokesman Mohammad Naeem, who noted that, “in addition to congratulations, the message called on all the people of Afghanistan to stand by and support the new government.” 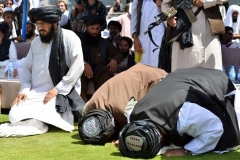 Taliban members pray in Kandahar at a gathering celebrating the U.S. troop withdrawal. Photo by Javed Tanveer/AFP via Getty Images)

The IUMS statement of support comes at a time when no government has yet to formally recognize the regime in Kabul, although Pakistani and Chinese government officials have hinted that eventual recognition could be on the cards, and Uzbekistan last week welcomed the formation of the new government.

Qatar sent its foreign minister Mohammed bin Abdulrahman Al-Thani to Kabul on Sunday for talks with Akhund and key members of his cabinet, including interior minister Sirajuddin Haqqani, a U.S.-wanted terrorist.

Qatar, whose sympathies with the Muslim Brotherhood and other Islamists have caused serious rifts with its Gulf neighbors, has long played an outsized role in Afghan affairs.

It has hosted a Taliban political office in Doha since 2013 and facilitated talks between the fundamentalist group and U.S. officials that led to the Feb. 2020 Doha agreement, as well as “intra-Afghan” talks that failed to prevent the Taliban’s violent takeover of the country.

Qatar is viewed by the Biden administration as a key partner in efforts to manage the crisis moving forward, including in efforts to bring out U.S. citizens and allies left behind when the Kabul evacuation mission ended.

Qatar is home to the Al-Udeid Air Base, a key hub for U.S. Central Command, and is also now housing the U.S. diplomatic effort focused on Afghanistan, led by Ian McCary, who was the deputy chief of mission in Kabul before the evacuation.