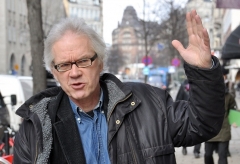 Lars Vilks in Stockholm in 2010. (Photo by Francois Campredon/AFP via Getty Images)

(CNSNews.com) – A special prosecutor investigation is underway in Sweden after a controversial cartoonist, living under police protection because Islamists threatened to kill him for blaspheming Mohammed, was killed in a collision Sunday between unmarked police car and a truck.

Two police officers assigned to protect Lars Vilks, 75, were also killed in the crash on a busy highway in southern Sweden. The driver of the truck survived and was airlifted to hospital.

Swedish police said that since police officers were involved, the special prosecutor’s office would investigate the incident and their actions.

“That a person we set out to protect, and the lives of our two colleagues, ended in this tragedy, is incomprehensible and heartbreaking,” said the chief of police for the southern region, Carina Persson.

According to Sweden’s Expressen evening newspaper, the highway lanes are separated by barriers, yet according to its information, the police vehicle had somehow crossed into the oncoming lane, collided with and became wedged under the truck, catching fire.

Swedish minister for culture and democracy Amanda Lind called it “unspeakably sad” that Vilks’ life would end in this way.

For almost 15 years Vilks lived under threats of death, since a regional newspaper in Sweden published a sketch depicting a dog with the head of a bearded man wearing a turban – supposedly a portrayal of Islam’s 7th century founder.

The article in the Nerikes Allehanda paper in 2007 was focused on freedom of expression, and argued that the right to freedom of religion and “the right to ridicule a religion” go together in a free society.

The case drew parallels with an earlier dispute over free speech and religious sensitivity, in which a Danish newspaper’s publication of a dozen cartoons depicting Mohammed sparked an uproar across the Islamic world, violent protests in several countries (including Afghanistan, Nigeria, and Libya), and a Mideast boycott of Danish goods. 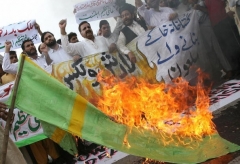 Pakistanis burn a ‘Swedish flag’ during an August 2007 protest in Lahore against Lars Vilks’ provocative cartoon. (Photo by Arif Ali/AFP via Getty Images)

The Vilks cartoon drew somewhat less attention, despite formal complaints from Pakistan, Iran and Egypt, and protests by the Organization of Islamic Cooperation (OIC). The 57-member bloc of Islamic states sought to use the case to drum up support for its campaign to outlaw the “defamation of prophets” and combat “Islamophobia.”

Then al-Qaeda in Iraq – the group that would later morph into ISIS – posted a message on a jihadist website offering to pay $100,000 to anyone who killed Vilks. It offered to increase the bounty by 50 percent if his throat was slit.

The message, issued in the name of Abu Bakr al-Baghdadi, also offered $50,000 for the death of the editor of Nerikes Allehanda. (Baghdadi was killed during a U.S. special forces raid on a compound in northwestern Syria in October 2019.)

Over the years since, Vilks was the target of several assassination attempts and plots.

In 2010, days after he was assaulted by Muslim protestors on the Uppsala University campus after a lecture on art and freedom of expression, Vilks’ house was firebombed. When two brothers – Swedes of Kosovar origin – appeared in court on arson charges one of them described the artist as “Islam’s greatest enemy right now.” The two were convicted and sentenced to two and three years’ imprisonment.

In December of that year, two bombs exploded in Stockholm and an apparent suicide bomber – a 29 year-old Iraqi-born Swedish national – was killed. Shortly before the blasts emails sent to the Swedish security service and a news agency linked the attack to Swedes’ support for Vilks’ cartoons as well as the deployment of troops in Afghanistan.

Also in 2010, U.S. federal authorities unsealed an indictment against a Pennsylvania woman accused of trying to recruit others for a plot to kill Vilks. Colleen LaRose, a convert to Islam, was convicted in 2014 for her role in the plot and sentenced to 10 years’ imprisonment.

In 2013, Vilks featured on a list of people wanted for “crimes against Islam,” published in Inspire, a propaganda publication of al-Qaeda’s Yemen-based affiliate, al-Qaeda in the Arabian Peninsula (AQAP).

In 2015 a gunman opened fire on a café in Copenhagen, Denmark where Vilks was participating in a debate on free speech. A Danish filmmaker was killed and three policemen were injured.

The perpetrator, a 22-year-old Danish-born man of Jordanian-Palestinian heritage, went on to kill a security guard at Copenhagen’s main synagogue before police tracked him down. Omar El-Hussein, who had pledged loyalty to Baghdadi in a social media post, was killed in a shootout.

When four men were later put on trial accused of helping the gunman, one confirmed in court that Vilks was the intended target of the café shooting.