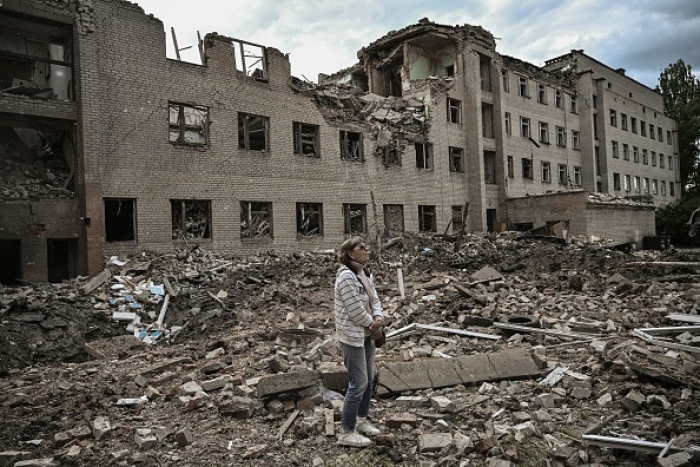 Bombed buildings in the Donbass region, the location of some of the fiercest fighting during the Rusian invasion that began in February. (Photo by Aris Messinis/AFP via Getty Images)

(CNSNews.com) – A report by Amnesty International accusing Ukraine of “violating the laws of war” by basing troops in residential areas is attracting sharp criticism in Kyiv – and an extraordinary statement from the global human rights organization’s own Ukraine branch, distancing itself from the report. 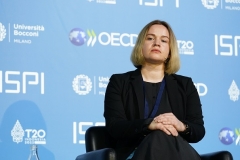 The organization’s Ukraine director, Oksana Pokalchuk, said her team had done everything it could to prevent the release of what it considers a one-sided report – but that its objections were overruled.

In the report released on Thursday, Amnesty said between April and July its researchers investigating Russian military strikes in the Kharkiv, Donbass and Mykolaiv regions “found evidence of Ukrainian forces launching strikes from within populated residential areas as well as basing themselves in civilian buildings in 19 towns and villages in the regions.” It said it found five locations where Ukrainian troops had used hospitals as “de facto military bases.”

“We have documented a pattern of Ukrainian forces putting civilians at risk and violating the laws of war when they operate in populated areas,” said Amnesty Secretary-General Agnes Callamard.

Russian diplomats, accustomed to being on the receiving end of criticism from human rights advocates over the invasion of Ukraine, were quick to spread the word.

“Amnesty confirms Ukraine tactics violate international humanitarian law & endanger civilians,” tweeted the Russian Embassy in London, adding that that was “exactly what Russia has been saying all along.”

(That same Russian embassy account posted a tweet on July 29 saying captured Ukrainian troops who had defended the Azovstal steel factory in Mariupol during the long siege should be hanged “because they’re not real soldiers. They deserve a humiliating death.” Twitter said the tweet violated its rules on “hateful conduct” but did not remove it.)

Ukrainian President Volodymyr Zelenskyy accused Amnesty of trying to “shift the responsibility “from the aggressor to the victim.”

“Our defenders defend their people and families. People’s lives are an absolute priority for Ukraine, which is why we are evacuating residents of front-line cities,” said Mykhailo Podolyak, an advisor to Zelenskyy.

Podolyak said Russia was doing its best to discredit Ukrainian armed forces in Western eyes and to disrupt the supply of weapons, using all of its “agents of influence” to do so.

“It’s a shame that an organization like Amnesty is involved in this disinformation and propaganda campaign.”

Foreign Minister Dmytro Kuleba said Amnesty was “creating a false balance between the criminal and the victim. Between a country that exterminates the civilian population by the thousands, and a country that is desperately defending itself …”

Pokalchuk, Amnesty’s Ukraine director, said in a statement the report had been compiled from data collected by “foreign researchers” attached to Amnesty’s global office.

“The Ukrainian office was not involved in the preparation or writing of the text of the publication,” she said, adding that her team’s arguments about the “inadmissibility and incompleteness” of the material were not taken into account.

She attributed the situation to “bureaucracy, misunderstanding of the local context, inflexible work system, [and] ignoring the opinion of the Ukrainian team and the position of the human rights community in Ukraine.”

Pokalchuk said the Ukraine office had sought to prevent the material from being released. When that was unsuccessful, it attempted to minimize its distribution “due to its, in our opinion, one-sidedness,” refusing to translate it into Ukrainian or to publish it on its website.

The Ukraine team had asked to see the material in advance, but that did not happen, according to Pokalchuk.  She said it had persuaded those compiling the report to seek an official comment from the Ukrainian defense ministry, but “unfortunately, they did not give enough time to receive an answer and published it research without their comment.”

(Amnesty said it had contacted the ministry on July 29 but had received no response by the time of publication on Thursday.)

“Every person from the Ukrainian office of Amnesty knows that Russia is responsible for crimes of aggression against Ukraine,” Pokalchuk said. Many of the team had themselves been “forced to save themselves and their loved ones from the war with Russia, leaving everything behind.”

She concluded by saying the team would “continue to fight in the future in different forms and in different positions, no matter what it costs us.”

“I and the team of the Ukrainian office believe in human rights, we believe in the victory of Ukraine, we believe that all those guilty of war crimes should be brought to justice.” 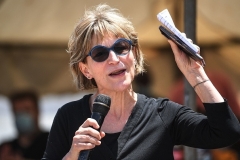 Responding to criticism – although not directly to Pokalchuk’s statement – Amnesty head Callamard said the group has “tirelessly” documented Russian aggression and war crimes in Ukraine.

“To those who attack us [for] alleging biases against Ukraine, I say: check our work. We stand by all victims. Impartially.”

In a separate tweet, Callamard described those attacking the report as “Ukrainian and Russian social media mobs and trolls.”