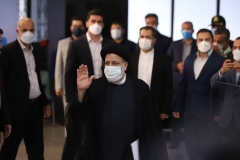 Iranian judiciary chief Ebrahim Raisi, front, arrives at the Interior Ministry to submit his candidacy for the June 18 election. He is the frontrunner in a group of seven men, all hardliners, permitted to run to succeed President Hassan Rouhani. (Photo by Majid Saeedi/Getty Images)

(CNSNews.com) – As Iran prepares to elect as president one of seven handpicked loyalists of supreme leader Ayatollah Ali Khamenei – including an alleged mass killer and a man wanted in connection with a deadly terrorist bombing – a boycott campaign reportedly is picking up steam.

Several hundred dissidents and activists in an open letter last month called on voters to boycott the election, describing it as little more than a “formality.” They called for the removal of the supreme leader, free and fair elections, and the clerical system to be replaced by a secular democratic constitution.

Supporters of the exiled National Council of Resistance of Iran (NCRI)/Mujahideen-e Khalq (MEK) are calling for a boycott of the June 18 election under the slogan, “My vote is regime change” (and the social media hashtag # BoycottIranShamElections).

The opposition group says its members have been handing out leaflets and putting up posters calling for a boycott. They feature slogans including “Down with Khamenei” and “No to religious dictatorship, yes to a democratic republic.”

And students at the University of Isfahan posted on the Telegram messaging app calls for a boycott, saying Iranians were “fed up with the economic hardships” and a political situation in which participation was impossible unless activists “risk their life and freedom,” Iran International reported.

Outgoing President Hassan Rouhani has said a good turnout would be a sign of the legitimacy of the establishment and a symbol of the freedom of choice of the Iranian people.

Defense Minister Brig. Gen. Amir Hatami early this week denounced “the enemy” for pushing for a low turnout, saying that the maximum presence of voters will guarantee the country’s interests and national security.

As has occurred before every presidential election since the 1979 revolution, the Guardian Council, a religious-judicial body partly appointed by the supreme leader, a week ago ended its vetting process by approving seven candidates, rejecting more than 580 other hopefuls, including dozens of women.

Leading the group of permitted candidates is Ebrahim Raisi, the regime’s judiciary chief, who has been linked to the secret executions of thousands of dissidents 33 years ago, in line with a decree by then-supreme leader Ayatollah Ruhollah Khomeini.

Raisi was Iran’s prosecutor general until 2016 and was a runner-up to Rouhani in the 2017 presidential election (Rouhani received 57 percent of the vote to Raisi’s 38 percent.)

Khamenei then appointed Raisi to head one of the regime’s most important endowments, and in 2019 elevated him to serve as chief justice.

The U.S. Treasury Department, which designated Raisi for sanctions in 2019, says he had also been involved earlier “in the regime’s brutal crackdown on Iran’s Green Movement protests that followed the chaotic and disorderly 2009 election.”

Another approved candidate, former Islamic Revolutionary Guard Corps (IRGC) commander Mohsen Rezai, is wanted by Argentine authorities in connection with the deadliest terrorist attack in that country’s history – the 1994 suicide truck bombing at a Jewish community center in Buenos Aires in which 85 people were killed.

Two other previous presidential hopefuls in the running again are Saeed Jalili, a former nuclear negotiator and secretary of the supreme national security council; and Mohsen Mehralizadeh, a former provincial governor.

All seven men are considered hardliners; there are no purported “reformists” in the field to succeed Rouhani, who in the Iranian context was described as a “moderate.”

Despite reformists being shut out by the Guardian Council, some using that label have decided to throw their support behind Raisi, who is widely expected to win the largely engineered contest.

A spokesman for this group, Khezr Khalili, said they decided to campaign, despite disappointment over the vetting process, “to encourage the people to participate in great numbers in the elections and support Ayatollah Raisi.”

(Raisi is sometimes referred to as “ayatollah” although he reportedly holds a lower-level clerical title in Shi’a Islam, that of “hojatolislam.”)

Khamenei has instructed the candidates to focus on economic issues on the campaign trail, rather than foreign policy.

The question of talks currently underway in Vienna over a U.S. return to the Obama-era nuclear deal has not featured, although government spokesman Ali Rabiei said on Tuesday the outcome of the election would not affect the nuclear talks.

Last month Secretary of State Antony Blinken would not be drawn into the Iranian election issue, when asked by a Financial Times reporter how the predicted election of a hardliner could affect the Vienna negotiations.

“Look, it’s very hard to predict, and certainly, I don’t want to get into hypotheticals about what one outcome or another in Iran’s elections – what impact that would or wouldn’t have on any nuclear negotiations,” he said.

Blinken noted that power in Iran lies in the hands of the supreme leader, “and he’s the one who has to make the fundamental decisions about what Iran’s approach would be.”