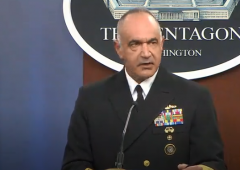 (CNSNews.com) - Admiral Charles Richard, commander of the U.S. Strategic Command, told a news briefing on Monday that China is now capable of directly threatening our homeland.

"I get apprehensive that we are not fully conscious as a nation of the threats that we face, right?" Richard said. "China now has the capability, and we can get into the specifics, to directly threaten our homeland from a ballistic missile submarine.

Richard later clarified that he was talking about the "American people" not being fully conscious of the threats we face, not the current administration.

He pointed to "duck and cover drills" familiar to American school children in the 1960s, when nuclear war was high on the list of concerns.

Back then, Richard said, "we knew that there was a threat to us that might require us to respond strategically. We don't even think about that anymore.

“We take strategic deterrence for granted in a lot of cases, not acknowledging the fact that we have never had a nuclear attack on the nation and haven't had a great power war in 70 years, was not just some accidental…event in history.

“It was a lot of hard work by a lot of people to maintain systems ready to go, such that we deterred that from happening. That's what I'm talking about.”

Admiral Richard noted that China plans to double its nuclear stockpile by the end of the decade, something that "to my mind, is increasingly inconsistent with its stated 'no first use' policy.

"We're ready," he added, pointing to U.S. bomber task force missions that operate worldwide to project a show of force and support of U.S. allies.

Richard also noted China's "impressive" ability to accomplish what they set their mind to.  He gave the example of China's coast guard, which was established in 2013, only seven years ago, and now has 255 ships.

"I just think that their strategic forces (nuclear weapons and delivery systems) are next on their to-do list, right? And I'm trying to posture us for the threat that we're going to face, not the one that we have today," he said.