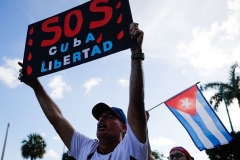 A show of support in Miami for Cubans protesting their repressive government on July 18, 2021. (Photo by EVA MARIE UZCATEGUI/AFP via Getty Images)

(CNSNews.com) - As street protests roil Cuba, and the communist regime cracks down with mass arrests and Internet blackouts, the Biden Administration is considering additional sanctions on "specific" Cuban officials as well as "viable options to make the Internet more accessible to the Cuban people," a State Department spokesman said on Wednesday.

The Miami Herald reported that President Biden has directed the State Department to consider increasing the staff at the U.S. embassy in Havana to boost engagement with the Cuban people; and he's directed a working group to look for ways to get remittances directly into the hands of the Cuban people without the government skimming dollars off the top.

On Wednesday night, Sen. Marco Rubio (R-Fla.), the son of Cuban refugees, explained why the Cuban people are rising up against their repressive government:

The third is, they're liars. Marxism and socialism always has to lie. Fidel was a liar. And every one of them are liars. There is no U.S. embargo against the Cuban people.

If a Cuban tonight wants to open up a Versailles (restaurant) in Cuba, they can, and we can sell them stuff. The only embargo is on the Cuban regime, because they own everything. Every business, every hotel, every restaurant, they own it. They own every single one of them.

And what President Trump did is, he said, very -- and the policies he put in place, it was very simple. If you're a private citizen of Cuba, you can open up a private business, and we can do trade with you. But we're not going to do trade with military-owned companies, because all that money goes into their pocket.

So that's what's happening here. The people of Cuba, especially now that they have had access to the Internet, they realize -- they see how their cousins, their families are living outside of Cuba.

Some in President Biden's own party are pressing him to lift the embargo on Cuba, calling it cruel and inhumane, but Rubio said Cubans are suffering because of communism, not the embargo:

The remittances -- the remittances go to a bank that they set up, the military set up in Panama, OK? You send the money, they take 10 percent off the top. Then they take your dollars away from you, they turn it into this Cuban currency that's worthless. It's worthless in Cuba, imagine everywhere else.

And then they keep the dollars. It's a scheme. And they're walking us right into the trap, and you've got the two people in charge of Cuba policy right now. And the Biden administration want to open it all up.

One of them, the lady at the State Department was the one organizing trips to take congressmen and senators to Cuba to fawn and grovel all over the Cuban regime, so of course these policies are schizophrenic. The people in charge of it are sympathizers.

Rubio said the Russian military presence in Cuba is "real," but "in the end it's not going to save this regime.

“This regime has been mortally wounded. It's lost its legitimacy. I'm not telling you it's going to be quick and it's going to be easy. But it's a dying animal. And we need to do everything we can to expedite its passing."