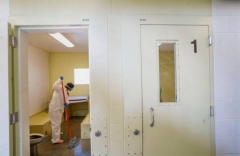 (CNSNews.com) - Approximately 208,500 prisoners were granted “expedited release” from jails in the United States in the first four months of the COVID-19 pandemic because of the pandemic, according to a report released by the U.S. Justice Department.

Jails also admitted fewer prisoners during that period, according to the report.

“The impact of COVID-19 on local jails began in March 2020, with a drop of 18% in inmate population between the end of February and the end of March, followed by an 11% drop by the end of April,” said the report published by the Bureau of Justice Statistics.

“The decline in the inmate population since midyear 2019 resulted from both a reduction in admissions to jails and expedited releases in response to the COVID-19 pandemic from March to June 2020,” said the report.

“During the pandemic, jail facilities became less crowded, as indicated by the decrease in occupied bed space from 81% at midyear 2019 to 60% at midyear 2020,” it said.

“Expedited releases,” as defined by the report, include: “All inmates released to limit inmate risk and exposure, or due to coronavirus-related understaffing, court orders, and legislative mandates.”

“Admissions,” as defined by the report, include: “All persons booked into and housed in jail facilities by a formal legal document and the authority of the courts or some other official agency, including repeat offenders booked on new charges and persons sentenced to weekend programs or entering the facility for the first time.”

“This decline is attributable to the pandemic-related reduction in admissions and expedited releases from March to June 2020,” the report said.