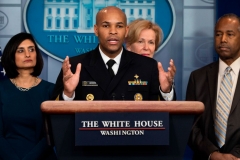 US Surgeon General Jerome Adams speaks during a press briefing about the Coronavirus (COVID-19) in the Brady Press Briefing Room at the White House in Washington, DC, March 14, 2020. (Photo by JIM WATSON/AFP via Getty Images)

(CNSNews.com) - The CDC and FDA is contradicting Pfizer in saying that people don’t need to get a third booster shot right now.

Dr. Jerome Adams, former surgeon general for the Trump administration, echoed that sentiment, telling CNN’s “New Day” that even in the face of the Delta variant, waning immunity is 60 to 70 percent, while the flu shot is 40 to 60 percent.

When asked whether Americans need to get a third shot, he said, “Not at all, not at all. Again, the protection even in the face of delta variant and waning immunity is 60-70%. Flu shot is 40 to 60%. We're still way better than the flu shot in any given year. You're still protected.

“What I'm worried about quite frankly is the pockets you mentioned that are under vaccinated. I'm worried the FDA quite frankly hasn't yet given us an update on full approval of these vaccines, which we know is causing hesitancy in many people and which also is causing companies and businesses and schools to delay their decisions about vaccine mandates,” Adams said.

The former surgeon general said that it’s “troubling’ that there is “such a lack of coordination on communication” between the vaccine manufacturers and the federal government.

“But here's what people need to know. The companies are thinking about where the hockey puck is going to borrow a Wayne Gretzky analogy. We know immunity does tend to wane over time as we’re going into the winter in particular. We want to make sure we are in the best possible position to protect people in nursing homes,” Adams said.

“They were the first vaccinated and first at risk for waning immunity in a Delta variant, whereas the government, FDA and CDC, are looking at where the hockey puck is right now. They want to assure Americans your best protection still is a vaccine, and you still have great protection, better than for the flu shot in any given year even in the face of variants and waning immunity,” he said.

Adams said that he’s “absolutely concerned” that people may get confused about the need for a third booster shot.

“I am absolutely concerned about the confusion. Again, I hope they can get on the same page. One of the things we did last year, Dr. Fauci, Dr. Collins, myself, we met with the companies weekly to make sure we understood what they were saying and we could coordinate messaging because this whiplash really is troubling to the American people, but understand, vaccinations are your best bet right now,” he said.

He said he’s “very concerned” about the impact of the Delta variant because of hospitalizations on the rise in certain parts of the country.

“Well, I'm very concerned, but I'm concerned because the Delta variant is covid's new offense, and our defense is vaccinations, testing and masking, and we're not where we want to be on any of those measures. We really need to continue to improve our ground game on vaccinations,” Adams said.

“I do want to applaud the Biden administration for the announcement this week about increased efforts at the community level. We really need to make sure we're funding and empowering efforts at the community level and work sites, school-based vaccination clinics, and again, putting mobile vaccine sites in communities so people can avail themselves of these great vaccines which are our best protection,” he said.

“Otherwise we're going to be forced to rely on masking, on shutdowns. When you look at the UK, when you look at other places that are being overwhelmed,” the former surgeon general said.

When asked about criticism of the government’s plan to send volunteers door-to-door to inform people about the COVID vaccine by some like Rep. Marjorie Taylor Green and Missouri Gov. Mike Parsons, Adams said, “John, you and I talked about this frequently. And one of the things that I lament is just how politicized this conversation has become.

“Your viewers need to know the authority lies at the state and local level for public health, and that's where these decisions should be made, and there's always been a distrust of government, particularly federal government in certain parts of the country. People are concerned when they hear or think that the federal government is going to be knocking on their doors. That is not the case,” he said.

“What we want are for local community groups, institutions that people trust to be able to help engage, empower, answer questions. It's okay to have questions. I've long said it's not okay to let misinformation lead you to make a bad decision for your health, and that’s what we want to do. We want to give you answers to your questions, access to these life-saving vaccines,” the former surgeon general said.

When asked to react to Sen. Rand Paul (R-Ky.), a medical doctor, saying he plans to introduce an immediate repeal of mask mandates on airplanes when the Senate returns, Adams said he hopes Paul will “let science lead the way.”

“We know we're fighting against a new emerging Delta variant wreaking havoc on the globe. We know our defense is vaccinations, masking and other mitigation efforts, and I hope that we don't run away from these defensive protective measures if we see cases continuing to go up. So I hope we let science lead the way,” he added.