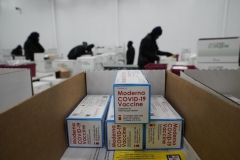 - Boxes containing the Moderna Covid-19 vaccine are prepared to be shipped at the McKesson distribution center in Olive Branch, Mississippi, on December 20, 2020. (Photo by PAUL SANCYA/POOL/AFP via Getty Images)

In an interview on Fox Business’s “Mornings with Maria Bartiromo,” Bartiromo asked, “Does that mean nobody is safe? Will the technology companies be forced to share their algorithms? Will Starbucks be forced to share its coffee recipe to Chinese coffee companies? I mean, where does it end?”

“Well, it ends when we finally learn the 11 herbs and spices that Colonel Sanders put in the Kentucky fried chicken recipe, we'll finally get to that. This is really government overreach in the worst way,” Huckabee said. “I mean, where does it end? That's the legitimate question that you're raising, Maria.

“When the government can tell a private corporation that it has to give away its trademark secrets, its intellectual property, things that it spent millions, maybe billions to develop, government is too big at that point, and it destroys the basic foundation of a free enterprise system that says look, I have a right to create something, and I have a right to enjoy the benefit of what I created, because I put a lot at risk. Therefore, I should enjoy the rewards,” he said.

“What did government put in? Government, again, is stepping into an area where it has no business to step, and I'm hoping that American people will wake up and see that what Uncle Joe is doing is really the antithesis of how the American economy and the American society is supposed to work,” Huckabee said.

On the issue of Facebook’s Oversight Board deciding to continue its suspension of former President Donald Trump’s Facebook page and Instagram account, giving the company six months to “justify a proportionate response that is consistent with the rules that are applied to other users of its platform,” the former governor pointed out that only five people on the board are American and the other 15 members are from overseas.

“Well, there's 20 people on that board. Only five of them are American. The board is based in London. I'm thinking what does a board where three-fourths of it don't even belong to the United States of America, what right do they have to determine whether an elected sitting president of the United States should not be able to speak to the constituents of America, both the ones who voted for him and the ones who voted against him,” he said.

“And If Facebook is going to start banning political figures, and picking some over the other, I'm thinking somewhere out there in America there is an aspiring attorney who sees a billion dollar -- multibillion dollar lawsuit against Facebook, not only for restraint of trade but also I think they have a really solid case to go after them for frankly election law violations,” Huckabee said.

“This is an election contribution on the part of Facebook, giving it to the other side, and it is an illegal contribution, and somewhere Zuckerberg is going to meet his comeuppance. I’m convinced of that. It may not be this week, this month, but somewhere there are some attorneys figuring out that if they got 30 percent of this case, they can retire for life and live the high life,” he said.