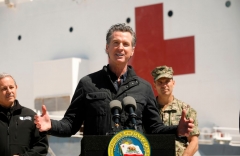 (CNSNews.com) – Former Arkansas Gov. Mike Huckabee proposed Thursday that government officials who close down businesses because of the coronavirus should lose their paychecks too.

In an interview with Fox News’s “America’s Newsroom,” Huckabee was called out government officials like California Gov. Gavin Newsom who had to apologize for violating his own rules when attending a dinner party at an expensive restaurant earlier this month wearing no mask and not social distancing.

The dinner party included people from several different households when the governor’s own rules called for limiting gatherings to no more than three households.

“While our family followed the restaurant’s health protocols and took safety precautions, we should have modeled better behavior and not joined the dinner," Newsom said in a statement to KTVU.

Although Newsom’s spokesperson said the dinner didn’t violate state guidelines because it was held at an outdoor dining area of the restaurant, a witness said the sliding glass doors had to be closed because the group was so loud.

Fox News host Trace Gallagher pointed out that the CDC says that loud events where you have droplets coming out of your mouth can be super spreader events.

“This thing broke every rule you can have,” he said.

“I think you are being a little harsh on him, Trace, because I mean he didn't sing. He didn’t chant, and he didn't worship. Those things would have been dangerous, but simply going and not wearing a mask and yelling with his friends, that's okay. Look, he is phonier than a vegan at a steakhouse, and he just proved it and that video just undid him,” Huckabee said.

The former governor proposed “a fix to all this” whether it’s Chicago Mayor Lori Lightfoot, Newsom, or D.C. Mayor Muriel Bowser.

“They are making big decisions about the peasants like us who have to live by the rules, but they don't live by them, and they have no consequence. They don't lose a dime of their salary. They get taxpayer money, and it never goes away. Let it go away. Let them suffer consequences financially. You're gonna see this change,” he said.

Gallagher noted that the average tab at the French Laundry restaurant where Newsom dined is about $1,000.

California GOP Committeewoman Harmeet Dhillon reacted by saying, “Eating with a bunch of lobbyists at an expensive restaurant, this is at the same time that you’ve put half of California out of work. Add up drinks and appetizers, their meal per person was more than the monthly unemployment check.”

“Yeah, this is not a place where people get their clothes cleaned. Their wallets are cleaned out, because it’s that expensive. The average minimum dining experience is $350 per person. Minimum,” Huckabee said.

“Think about how many people could even conceive of spending that for a meal. You’ve got California legislators going to Hawaii. This is hypocrisy, and they need to read the story of the Bolshevik Revolution and Marie Antoinette and find what happens when the peasants get it up to here with that kind of stuff,” he said.

Gallagher pointed out that California Assembly member Jordan Cunningham tried to downplay a group of lawmakers from California, Washington state, and Texas traveling to Hawaii by saying, “This event promotes intelligent public policy in our state. In fact, we are here discussing ways we can safely reopen our society and save our small businesses, workers and kids.”

Gallagher said, “The excuses are almost as annoying as the actual acts themselves.”

“They truly are. To be in an airplane for eight hours in a small aluminum tube. That's perfectly safe. To get to Hawaii, yeah that's fine. I'm sure all the little people, all the little people understand how valuable it was to them for their public officials on the taxpayers' dime to go to Hawaii and back when they can't even go to church or go and have Thanksgiving with their own families. Sure, that makes sense,” Huckabee said.