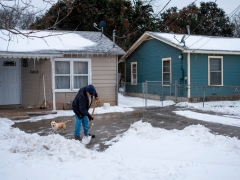 A Waco, Texas, resident clears snow from his driveway alongside his dog on February 17, 2021 as severe winter weather conditions over the last few days has forced road closures and power outages over the state. (Photo by MATTHEW BUSCH/AFP via Getty Images)

(CNSNews.com) - Texas having its own power grid is good when it comes to cybersecurity, but not so much when it comes to “an arctic blast” like the one that knocked out power to millions throughout the state last week, Rep. Michael McCaul (R-Texas) told CNN’s “State of the Union” on Sunday.

When asked whether it’s an acceptable trade-off for the state to be without power for a few days to avoid federal oversight of its separate deregulated power grid, McCaul said, “I think power-sharing would have been helpful, if we could have shared with other power grids.

“Texas does have its own grid called ERCOT. It was set up that way to be independent of federal oversight and regulations, and, yes, that's very good with things like cybersecurity, not so good when it comes to an arctic blast like this one,” he said.

“In 2011, the state legislature, after we had a really bad freeze, came out with a bipartisan report with recommendations to the energy companies and ERCOT as to how to winterize our operations. The difference between Texas and, say, the Northeast, is, we're not prepared for this. We're not used to this kind of weather,” the congressman said.

“So, when it happened, our entire energy system was not winterized for subzero-degree temperature, as it is in the Northeast. That is what we're going to be taking a look at moving forward are, these recommendations were made in 2011, and how can we move forward to winterize these operations, so this never happens again?” McCaul said.

Host Dana Bash pointed out that Texans are seeing outrageous energy bills because their rates are tied to the energy market, and they’re having to empty their life savings to pay for bills in the thousands.

“Are you going to be able to fix that?” Bash asked.

“A lot of people are hurting right now. People have died, and I had two nursing homes, assisted living, that were without power, a hospital without power that we were able in an emergency basis, to get power to them. Can you imagine?” he said.

“The death toll could have been much higher, but through talking to my constituents and my elected officials, we were able to stop things like that from happening, and that's why it's so important for, I think, elected officials to be close to the ground when you have a time of crisis like this,” the congressman said.

As to whether McCaul plans to use federal disaster relief funding to help people pay their bills, the congressman said, “Yes, that's the current plan, is, with the federal assistance, be able to help the homeowners both repair, because we have a lot of water leaks, a lot of water damage, pipes bursting, but, also, their electricity bills as well.”