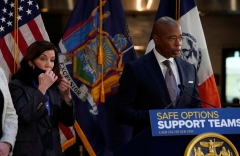 (CNSNews.com) – New York City Mayor Eric Adams told CNN’s “State of the Union” on Sunday that the reason he hasn’t mandated weekly COVID testing in schools is because he believes it will be “more harmful than helpful.”

“Now let's get down to the task of keeping our schools open. Science dictates one thing. The safest place for children is in a school building, and what we want to do is not get in the way of preventing children from coming into that building. Some parents have been reluctant of doing the mandatory testing,” he said.

“We believe the combination we have put together now of making sure we test in the classroom, if it did not spread, keep that classroom open, remove that child out, and also make sure children are in a safe space, because all children can't afford or do remote learning, because they don't have access to technology,” Adams said.

“They -- English is a second language. There's many reasons why we should be in school buildings,” the mayor said.

“But I guess the question is, wouldn't mandated weekly testing for students, teachers, faculty be the safest way to keep the schools open? Why are you not doing that?” host Jake Tapper asked.

“Because, ideally, that would be the safest place -- safest way to do it, but you know what would happen? I don't want to lose some of my children, and the way we are doing it now, we are being successful in keeping down the rates low,” Adams said.

“And if we reach that moment that we have to have that mandatory testing, then we will evaluate that again with our medical professionals, but I need my children in school, and any barrier to do that, I believe is more harmful than helpful,” he said.

The mayor said that he will determine whether to institute a vaccine mandate for students at public schools.

“Only 40 percent of New York City residents under the age of 18 have received at least one shot of the vaccines. California is going to require all students in public schools to get vaccinated to attend school in the fall. Will New York City do the same?” Tapper asked.

“That is something that I am speaking with my health care professionals to do an evaluation to determine, is that -- if that is what we do. Let's be clear. In this country, we do vaccinate for smallpox, measles and other things, and so we need to engage in a real conversation of how to educate, use the time before the fall to educate our parents to show the importance of it, and we're going to -- we're going to sit down and determine if we're going to roll that out as well,” Adams said.