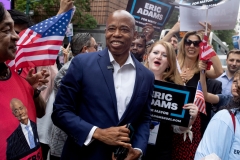 (CNSNews.com) - New York City mayoral candidate Eric Adams told CNN’s “State of the Union” on Sunday that he’s for eliminating qualified immunity for police officers who show a reckless disregard for the life of citizens.

CNN’s Jake Tapper asked Adams, “There's also in Washington big efforts at policing reform. Talks in Congress are stalled right now. Negotiators say it might actually fall through, in part because they can't strike a deal on qualified immunity, which is a policy that shields police officers from civil liability when they're on the job.

“You support eliminating qualified immunity, but Democratic Whip Jim Clyburn says he's willing to accept a deal without that provision. What do you think? Would that be a mistake?” Tapper asked.

Adams said he supports qualified immunity “with an asterisk.”

“I don't believe a police officer who is carrying out his job within the manner which he was trained to do so should be open to a lawsuit,” the former police officer said.

“If he's chasing an armed person who is discharging a weapon and that police officer discharges his weapon and an innocent person is struck by that, that weapon, we should not have that officer open to a lawsuit, but when you look at the case of a Floyd case, where, clearly, the officer went beyond his scope of responsibility, that officer should be open to a lawsuit,” he said.

“And so I don't believe we should be suing officers who are doing their job and some of the hazards of their job, but those who step outside of those boundaries and recklessly carry an act that causes life or serious injury, they should be open to being sued personally,” Adams added.