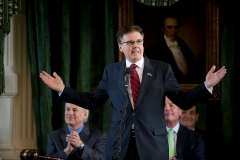 (CNSNews.com) - Texas Lt. Gov. Dan Patrick said Thursday that Texas Democratic lawmakers are lying about the GOP-backed voting bill, because nothing in the law suppresses anyone’s vote, and in fact, it allows voters to leave work during any of the early voting days to go vote.

During an appearance on Fox News’s “America’s Newsroom,” Patrick said that the Democrats who fled the state to thwart Republican efforts to pass the bill can’t hold out forever, because they have families to get back too, and as soon as “they get home for the special session, they'll be arrested, brought to the capitol and we'll pass these bills.”

Their absence has caused a number of legislative priorities to “die” because the lawmakers weren’t there, the lieutenant governor said.

So there’s a lot more going on than just this bill. They said there’s power in certain things, and they're being called courageous. I call them the liars club. They’re the liars club, because everything they’re telling you from the vice president down to the lowest level house member who’s on this trip - freshman, whomever it may be, they’re just lying to the American public, and the power’s in the truth.

You will find that we've extended the early voting hours in this bill. That today on election day you can actually -- you are required to be given time off work to vote. We’ve extended that for the entire early voting period. We've added over 60 more counties that have to add more voting hours. We’ve added more voting hours on Sunday. We've done nothing to suppress the vote in all of this. They talk about 24-hour voting, Bill, and drive-thru voting. That's not in the law. It’s never been in the law. One county out of 254 did that last year on their own, and we’re saying you can't do that.

One county can't go ahead and write their own rules. And why not have drive-in voting? It’s very simple, Bill and Martha. When you go in to vote, you go in by yourself. You don’t take your family and friends, but if you can drive-in vote, you can take a lot of people with you, and they can all decide who you’re all voting for in the car. It’s just nonsense. The same thing with 24 hour voting.

People who work 4 to midnight can vote before they go to work, or if they work midnight to 8, they can vote when they get off. This is all a big lie, a big lie, nothing more than that. So I invite people to read the bill for themselves, and they’ll see that the truth will prevail, because we're telling the truth as Republicans.

Host Martha McCallum pointed out that Republicans need to emphasize that the Democrats are trying to make voting accommodations that were instituted because of COVID permanent.

“The truth will prevail, and you’re absolutely correct, Martha, that this was Houston, Harris County that extended 24 voting and drive-in voting against the law - it’s not an election code. It’s never been in the code - on their own,” Patrick said.

“We can't have one county decide on their own rules, and I’ve explained why we don't need 24 hour voting - hard to get volunteers, hard to get workers. Very few people vote during that time. Shift workers can vote any time. We’ve extended again the hours for early voting and giving people off to vote every day during early voting,” he said.

“So we’ve done nothing but extend the voting, and this has nothing to do with the Trump election whatsoever. We’re just trying to write a really good bill that makes it easier to vote, and 95%, Bill and Martha, 95% of Texans in a Texas Association business poll have said it's easy to vote in Texas. I was in the Senate. I was one of the authors of the voter I.D. bill. We heard all this back that,” the lieutenant governor said.

“We’ve increased voting in gubernatorial elections by 76% from 2014 to 2018. We've increased voting in Texas more than any other state in the union, and again our early voting that we have as I said the other day with you on the morning, we have more early voting than six, seven, eight Democrat states and some have none. So Go to Texas legislature online,” Patrick added.