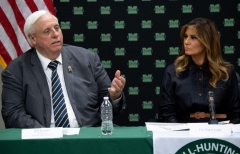 (CNSNews.com) – West Virginia’s COVID vaccination program is so successful that vaccine disbursement is at 98.1 percent – either “in people’s arms or with names tied to it,” West Virginia Gov. Jim Justice said Sunday.

“For the last week or so, we've been running not at 70 percent. We're running it right at 100 percent. Right now, we're at 98.1 percent, as far as vaccines in people's arms or names tied to it, you know, that are going to be put into people's arms immediately. We're saving all kinds of lives. We're putting our kids back in school,” he told CBS’s “Face the Nation.”

“West Virginia has been the diamond in the rough that a lot of people have missed. You know, we're first in the nation on being able to test all the people in our nursing homes and on and on and on. Absolutely. That's why we're leading the nation, because we are practical thinking people with a lot of really smart people here that are getting it done,” Justice said.

Host Margaret Brennan noted that the governor decided not to go with the federal program to use CVS and Walgreens to vaccinate in nursing homes, which is the Trump administration’s plan.

When asked why he went that route, the governor said, “Because really and truly, there are so many people that depend on their local health departments, their local pharmacies. Absolutely. Our ability to bring in the National Guard. You know, just think about it just for a second.

“You know, what we did is a lot of governors sat on their hands trying to come up with a system or a formula of what they were going to do. We didn't sit on our hands. I mean, we acted. We brought our local pharmacies in. We brought our local, you know, health departments in. We brought our National Guard in, and we started putting shots in people's arms, because this thing is all about age, age, age. That is all there is to it,” Justice said.

When asked whether he would tell other governors to throw out the federal government’s guidelines, the governor said, “If what we're going to do is create a bureaucracy with federal government guidelines and everything, when we know this is about age, age and age. We've got to get shots in people's arms, and every day we put a shot in somebody's arm, we're saving a life. You know, we need to get at it. I mean, that's all there is to it.”