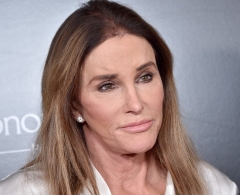 (CNS News) -- The transgender "woman" Caitlyn Jenner, formerly known as Olympic Gold Medalist Bruce Jenner, is running for governor of California as a Republican in a runoff election later this year. In a Wednesday interview with conservative Sean Hannity, Jenner said he supports limited government, low taxes, the border wall, the police, and ICE, the Immigration and Customs Enforcement agency.

"I am all for the wall," said Jenner. "I would secure the wall. We can't have a state -- we can't have a country without a secure wall."

Jenner also said that, as governor, he would do everything he could to eliminate sanctuary cities for illegal aliens in California. "I am for securing this state," said Jenner.  "I am pro-law enforcement. I am pro-border protection, okay? ICE, pro-ICE. We need these people, and they do a wonderful job."

In the interview, Hannity said, "I want you to grade Gavin Newsom," the Democratic governor of California.

"I mean, you've seen the video of him at The French Laundry [restaurant], okay?" said Jenner. "I can't go down to my restaurant, and all the employees in that restaurant down there are not working.  And he's up there dining."

He continued, "We see Nancy Pelosi. I can't go to my hair salon. All the salons in my town are closed. Nobody can go in there and nobody's working. People are losing money. But she can sneak in. And it's the hypocrisy of what's going on."

"Yes, it is -- a dynasty, I guess you could say, in Sacramento," a dynasty of Democrats, said Jenner.  "They've really been in charge for the last 40 years. I mean, we had Reagan come in a little bit, Arnold [Schwarzenegger] come in a little bit as Republicans, but it's been a dynasty."

"And as we see what happens here and, in the recall -- everybody was behind the recall," said Jenner.  "They needed 1.5 million votes, they got 2.1. But, of course, the Democrats had to verify every signature. ... Isn't it shocking?"

"And eventually they had wound up, after they dis-allowed like a half-million of them, and they had 1.6.," said Jenner.  "So the recall is on.But I'm really fighting against the hypocrisy that's going on up there, that he's been bad on every issue. He's bad on taxes. Obviously, we're the most taxed state in the nation."

"My friends are leaving California," said Jenner.  "Actually, my hangar, the guy across, Fred Griffin, he was packing up his hangar, I said, where are you going? And he says, 'I'm moving to Sedona, Arizona, I can't take it here anymore. I can't walk down the street and see the homeless.'"

When Hannity asked if Jenner would eliminate the "sanctuary" status of California, Jenner replied, "I would keep it a sanctuary state for small businesses."

"Meaning, I want small businesses to come into this state," he said.  "You know, I want people to create wealth here. I want -- and to employ people - - yeah, but as far as immigration, no, I am -- I am not on that. We need to spend some money to have a fair and equitable immigration system in this state."

Activists gather for a "Reunite Our Families Now" rally in Los Angeles, California on March 6, 2021, to protest continued deportations under US President Joe Biden, urging that ICE (Immigration and Customs Enforcement) be abolished and calling for the closure of camps where immigrants are being held. (Photo by FREDERIC J. BROWN/AFP via Getty Images)

When asked what he would do differently than the Democrats, such as continuing to build the border wall, Jenner said, "I am all for the wall. I would secure the wall. We can't have a state -- we can't have a country without a secure wall."

"You have two questions here," said Jenner. "One is stopping people from coming in illegally into the state, and then the second question is, what do we do with the people that are here?"

Later in the interview, Hannity asked, "Would you allow the state to work with ICE and enforce the laws? In other words, people get out of jail, they are supposed to be deported, would you eliminate all of the sanctuary status that currently exist in this state?"

Jenner said, "I would do my absolute best to do that. It's not going to be easy.... I am for securing this state. I am pro-law enforcement. I am pro-border protection, okay? ICE, pro-ICE. We need these people, and they do a wonderful job."