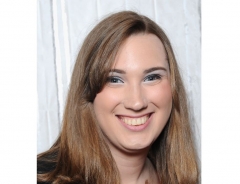 McBride, a left-wing Democrat, will represent Delaware's 1st district and will serve a four-year term.

Currently, McBride is the national press secretary for the LGBT activist group Human Rights Campaign. Although she is a biological male, McBride's preferred pronouns are "she/her."

According to the HRC website, "In 2012, Sarah made national headlines when she came out as transgender while serving as student body president at American University. A native of Wilmington, Delaware, Sarah serves on the Board of Directors of Equality Delaware and helped lead the successful effort to add gender identity and expression to her state’s nondiscrimination laws."

"In 2008, Sarah worked for Governor Jack Markell (D-Del.) and, in 2010, for former Attorney General Beau Biden (D-Del.)," said the HRC.  "Prior to coming to HRC, Sarah worked at the Center for American Progress and interned at the [Obama] White House, the first out trans woman to do so."

Beau Biden (1969-2015) is the son of Democratic presidential candidate Joe Biden. Beau Biden, the former attorney general of Delaware, died of brain cancer at the age of 46.