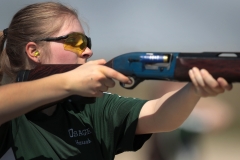 (CNS News) -- There were approximately 1.9 million guns sold in October 2020 in the United States, a year-over-year increase of 65%  from October 2019, according to Small Arms Analytics.

Single handgun sales totaled approximately 1.0 million, which is up 81% from October 2019.

"All other likely background check-related sales (0.14 million) increased year-over-year by 58%," said Small Arms analytics.  "This includes so-called 'multiple' sales where the exact split between handguns and long-guns cannot be determined from the data record."

Jurgen Brauer, the chief economist at Small Arms Analytics, said, “2020 continues on its record firearms sales pace, with the year-to-date total now reaching 18.6 million units sold. Handguns continue to outsell long-guns but at a continuously declining rate since June of this year. (In June, the rate was 2.2 handguns per long-gun; in October, it was 1.4 handguns per long-gun.)”