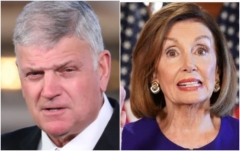 Graham concurred with the archbishop that Pelosi's lack of concern for the murdered baby is the "epitome of hypocrisy."

In a July 24 post on Facebook, Rev. Graham wrote, "I’ve got to hand it to the Catholic Archbishop from House Speaker Nancy Pelosi’s hometown of San Francisco for his boldness in speaking the truth about her support of the murder of babies through abortion."

"He said, 'To use the smokescreen of abortion as an issue of health and fairness to poor women is the epitome of hypocrisy," continued Graham.  "[W]hat about the health of the baby being killed? What about giving poor women real choice, so they are supported in choosing life?"

"I agree with him 100% on this and pray that Speaker Pelosi is listening and will take his words to heart," said Graham.

Pelosi, 81, claims she is a "devout Catholic" although she supports abortion across-the-board, as well as gay "marriage," gay adoption, and myriad other practices that are contrary to the moral teaching of the Catholic Church.

In his statement issued on July 22, Archbishop Cordileone, who leads the archdiocese of San Francisco in which Pelosi resides, said, "Let me repeat: no one can claim to be a devout Catholic and condone the killing of innocent human life, let alone have the government pay for it."