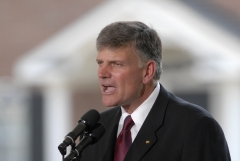 (CNS News) -- In a message noting the end of June's "Gay Pride month," Rev. Franklin Graham said the month was set aside to celebrate what God defines as "sin," and is therefore similar to setting a month aside to celebrate other sins, such as "lying, adultery, or murder." In the Word of God, it is all sin.

"The Bible also tells us that God hates pride," said the reverend.  "Shame on the nation that celebrates and glorifies sin. All of us are guilty of sin, which means breaking God’s standards. The Bible says, 'All have sinned and fall short of the glory of God.'"

"But instead of celebrating and taking pride in our sin, we should come to God, our Creator, in repentance, asking Him to forgive us and cleanse us," Graham added. "He sent His Son, Jesus Christ, to earth to pay the price for our sin by dying on a cross in our place. Jesus died, was buried, and God raised Him to life on the third day."

"If you are willing to turn from your sin and put your faith and trust in Jesus Christ, God will forgive you and give you a new life," said Rev. Graham.  "Now that’s something to celebrate!"