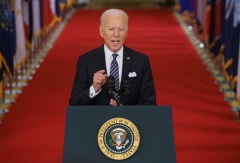 President Joe Biden marks the anniversary of the start of the Covid-19 pandemic on March 11, 2021. (Photo by MANDEL NGAN/AFP via Getty Images)

(CNSNews.com) – As he took credit for progress in combating the coronavirus pandemic, President Biden on Thursday night compared the number of vaccinations delivered before he took office and those delivered since, saying that when he became president only eight percent of Americans over 65 – “after months” – had received their first shot.

Biden’s "today" figure of 65 percent was close to being accurate. Centers for Disease Control and Prevention data show that as of March 11, 62.4 percent of over 65s have received at least one vaccine dose. (When the White House press office later on Thursday night released a transcript of the speech, it inserted [nearly] in front of the number 65.)

But Biden’s inclusion of the words “after months” was curious. It gave the impression that by the time he became president, it had taken “months” – an unspecified number, but plural nonetheless – for just eight percent of Americans over 65 to get vaccinated.

In fact, the Food and Drug Administration gave emergency use authorization for the first COVID-19 vaccine – the Pfizer-BioNTech product – on December 11, less than six weeks before Biden’s inauguration. The first inoculations began three days later.

The FDA’s second COVID-19 vaccine emergency use authorization, for the Moderna vaccine, was issued on December 18.

By December 20, 556,208 doses of vaccine were in Americans’ arms, and by the time President Trump left office, 16.5 million Americans had received at least one dose of the Pfizer or Moderna vaccine.

The number of vaccinations continued to climb after Biden took office – and, as expected, the pace accelerated as manufacturing output and distribution was ramped up – reaching 31.1 million by the end of January, 75.2 million by the end of February, and 98.2 million by Thursday. (A third emergency use authorization, for the Johnson & Johnson vaccine, came on February 27.)

A New York Times report this week stated that “the new administration expanded and bulked up a vaccine production effort whose key elements were in place when Mr. Biden took over for President Donald J. Trump. Both administrations deserve credit, although neither wants to grant much to the other.”

The development of COVID-19 vaccines last year was the fastest in history and began astonishingly quickly.

A graph shows the number of COVID-19 vaccinations administered in the United States since the first shot last December. (Image: Our World in Data)

“On January 10th [2020], the sequence was known,” National Institute of Allergy and Infectious Diseases Director Dr. Anthony Fauci told a Senate committee in mid-May. “On January the 11th, the Vaccine Research Center met to develop a plan. And on the 14th of January, we officially started the vaccine development.”

Biden in his speech gave no credit to the previous administration or its Operation Warp Speed. Although he did not mention Trump by name, the only apparent allusions to his predecessor were critical ones.

“A year ago, we were hit with a virus that was met with silence and spread unchecked – denials for days, weeks and months that led to more deaths, more infections, more stress and more loneliness,” he said, and later, “We lost faith in whether our government and our democracy can deliver on really hard things for the American people.”

Critics highlight Trump’s comments, especially early on, playing down the seriousness of the disease, such as his claim in early February last year that “when we get into April, in the warmer weather – that has a very negative effect on that, and that type of a virus,” – or later that same month, “one day, it’s like a miracle, it will disappear.” His skepticism about mask wearing also drew strong criticism.

Often overlooked is the fact that both U.S. health authorities – includingn Dr. Anthony Fauci – and the World Health Organization only changed their views on the need for widespread mask wearing as the pandemic evolved and knowledge grew. The WHO only began to recommend general mask wearing in early June, and then only “where there is widespread transmission and physical distancing is difficult.”