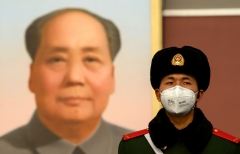 Only 26% of Americans say Russia is this country’s greatest enemy, up from 23% last year.

In the survey, Gallup asked, “What one country anywhere in the world do you consider to be the United States’ greatest enemy today?”

The big shift to view China as the top enemy, instead of Russia, coincides “with a period when the global economy and human activity were severely impacted by the coronavirus pandemic, which originated in China,” reported Gallup.

In addition, ”the rise in perceptions of China as the United States' greatest enemy is accompanied by a sharp decline since 2020 in those mentioning Iran (down 15 percentage points to 4%), as well as four-to-five-point declines in mentions of Iraq and North Korea and smaller declines in a handful of other countries,” said the survey firm.

”While Americans perceive China as the country's top enemy, half also believe that China is the world's leading economic power,” said Gallup.  ”This perception has noticeably increased since 2020, likely because of the COVID-related decline in the U.S. economy in the past year.

”While China has made strong progress in its overall GDP growth, it remains the world's second-largest economy to the United States.”

Gallup asked, “Which one of the following do you think is the leading economic power in the world today -- ?”

Fifty percent of Americans believe, incorrectly, that Communist China is the leading economic power in the world today.